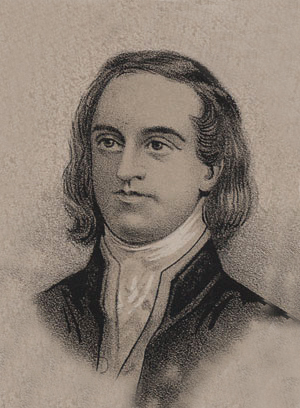 Born into a family of ministers and soldiers, Williams lived his life as a perfect reflection of those great men who came before him, as he battled his foes with sword, word and pen. Growing up in a wealthy family Williams had numerous education opportunities and personal tutelage; among these achievements Williams served as an aid to his uncle, Colonel Williams, founder of Williams College. It was on the battlefield of the French and Indian War that won Williams over to objections to English rule and allegiance to the patriot cause, and forever turned his actions to the preservation of his country.

After graduating from Harvard and working as a merchant, Williams made his political debut as a town clerk in Lebanon, Connecticut in the year 1756. He would continue this public service for the next forty-five years. Known for his consistency and discipline Williams also proved his devotion to country by serving as a selectman for twenty years, as a member of the Upper House for twenty-three years and a judge for thirty-five years. In these years of public service Williams never ceased to find opportunities to speak out against British oppression. His patriotism found its highest expression at the Continental Congress.

When fellow delegate, Oliver Wolcott was unable to sign his name to the Declaration of Independence, Williams gladly substituted for him. While serving in the French and Indian war Williams developed a disgust for the British high command– on their haughty conduct and their disinterestedness for the colonies. “The impression was powerful and lasting. At that time he adopted the opinion that America would see no days of prosperity and peace, so long as British officers should manage her affairs. On the arrival of the day when the revolutionary struggle commenced, and a chance was presented of release from the British yoke, Mr. Williams was ready to engage with ardor, in bringing about this happy state of things.”

Appending his name to the Declaration seemed like a sure death warrant, especially after the proclamation by King George that condemned those who opposed British rule to punishment by death. While having dinner with a few friends Williams is reported to have said with great calmness: “Well, if they succeed, it is pretty evident what will be my fate. I have done much to prosecute the contest, and one thing I have done, which the British will never pardon — I have signed the Declaration of Independence. I shall be hung.” Williams went so far as to call out those who shirked from their patriotic duty, as men deserving to be hung.

Marrying at the age of forty-one to Mary Trumbull, they raised their five children in Lebanon. When the revolutionary struggle broke out, the whole family applied their energies and resources to the cause of freedom so far as to give up their home to house soldiers during the winter of 1781. Williams had a generous heart for his family, and his country. At one time he exchanged $2,000 of his personal money for continental currency, but lost every penny of it. He counted it a monetary contribution to the American cause.

Although Williams held nothing back in defense of his country, he lost very little because his life was built on the individual liberty that invigorated his every motive of action. The likelihood of hanging was a little price to be paid for posterity, and Williams lived as one who had done his patriotic duty. In the event, he survived until 1811. A workaholic, he serving Connecticut in many different offices and helped get the Constitution ratified in Connecticut. The brief inscription on his grave really did summarize his life: “a firm steady and ardent friend of his country, and in the darkest times risked his life and wealth in her defense.”