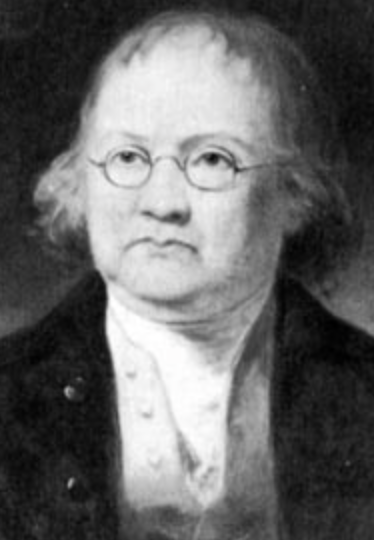 Born on December 22, 1727 in Newport, Rhode Island, William Ellery was a dutiful, determined and deeply religious man. At the age of 16 he was sent to study at Harvard, where he became fluent in Greek and Latin. As a highly educated young man, he was a brilliant and eloquent speaker and gained considerable attention for his elegant and neat handwriting. Upon graduating, he worked for his father’s mercantile business for 20 years, learning to trade and ship, which would later be useful when he was appointed to be U.S Collector of Customs.


In 1750 he married Ann Remington and together they had 6 children before she died 14 years later. He later remarried and had an additional 10 children. Although he worked as a merchant, he longed to study and practice law. However, he could not afford to go to law school and support his growing family. At the age of 40, Ellery had saved enough and was able to study law. In 1769, he opened his own law firm and began his life-long dream of helping others in need.

But it wasn’t merely law that held his interest. An avid gardener, Ellery grew flowers and vegetables, and tended with special care to most recent passion: politics. After the Stamp Act, Ellery grew more fervently patriotic, since as a trader and a merchant, he had a vested interest in the patriotic cause. When Rhode Island delegate Samuel Ward suddenly died of small pox, William Ellery was appointed to take his place. Riding his horse through the 250 miles of rough terrain of New England, Ellery arrived in Congress ready to sign the Declaration of Independence. He regarded the signing of the important document with much reverence. According to Merke Sinclair and Annabel Douglas MacArthur in their book, They Signed for Us, Ellery chose a special seat in order to observe the signing. “I was determined to see how they all looked as they signed what might be their death warrants. I placed myself near them and eyed each closely as he affixed his name to the document. Undaunted resolution was displayed on every countenance.” (Sinclair and MacArthur 30).

Truly, William Ellery regarded the signing of the Declaration as an important historical moment in the foundation of the young country and knew the sacrifices the coming months would ensue.

On 10 July 1776, William Ellery wrote to his brother: “We have lived to see a Period which a few years ago no human forecast could have imagined – to see these Colonies shake off and declare themselves independent of a State which they once gloried to call Parent …”

Indeed, not long after signing, Ellery narrowly escaped from his house, where the British seized his home and burned all his earthly belongings. However, for Ellery, the British could destroy his mortal riches, but they could not touch his unwavering faith. Whenever calamity or misfortune would befall the small, bespectacled patriot, he would utter a phrase that soon became the idiom he was most remembered for: “the Lord reigneth,” so great was his unwavering and steadfast hope in God.

Unlike other signers who suffered from poor health, Ellery was greatly blessed with excellent health, even up until his 90’s. At the ripe old age of 92, Ellery was found resting on his bed reading Cicero. The honorable gentleman faithfully served God and country till the end.