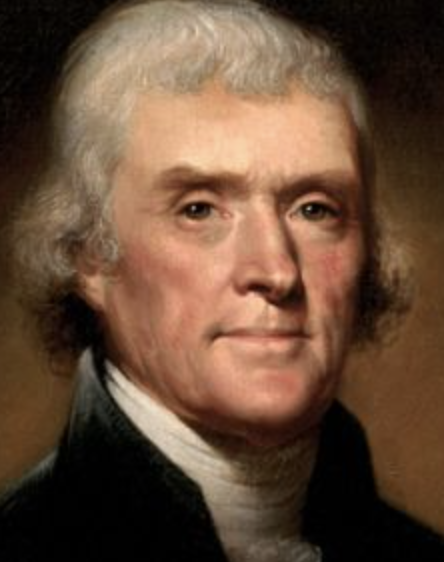 Born of modest lesser gentry in the piedmont of Virginia, no one would ever have guessed that this son of a frontier tobacco grower would go down in history as one of the most important and influential men America ever produced. Although he was a shy man who shunned the limelight and never gave public speeches, Jefferson possessed a towering intellect which explored many fields of thought including the sciences, architecture, literature, culture, agriculture, politics, religion, history, and philosophy. The Second Continental Congress turned to the thirty three year old Virginia polymath to write the Declaration of Independence.

Drawing on several other documents that expressed some of the ideas that the Congress had heartily debated, Jefferson’s version underwent revision in eighty five places by the other four members of the Committee, then the Congress as a whole, before reaching the published form. He went on to write the Virginia Statute of Religious Freedom, which took seven years to pass the House of Burgesses. The political life of the red-headed autodidact had only begun. His greatest desire was to live at his home, Monticello, and pursue his hobbies and intellectual interests but the American people and his political colleagues would not hear of it. He served in the Virginia House, a term as Virginia Governor, five years as Ambassador to France, Secretary of State to President George Washington, Vice-President to his revolutionary comrade in arms and friend (but soon to be estranged) John Adams, and President of the United States for two terms.

Jefferson became a polarizing figure, even among those whose political philosophies matched his own. He and Patrick Henry became enemies due to a perceived public slight. Jefferson opposed Alexander Hamilton in Washington’s cabinet and experienced strained relations with George Washington himself. A full believer in state authority, he opposed attempts to make the Federal government more powerful and obtrusive over the states. He stated his views with unmistakable vigor: “I have sworn upon the altar of God, eternal hostility against every form of tyranny over the mind of man.”

Thomas Jefferson read thousands of books, wrote several himself, while building, managing, and modifying Monticello and its attending gardens, lands and produce. He designed the initial buildings and was instrumental in establishing the University of Virginia. As President, Jefferson doubled the size of the United States through the Louisiana Purchase and sent Lewis and Clark to map and explore the land. He was inconsolable after the death of his beloved wife, Martha, who had given him six children. Nonetheless, his hospitality was legendary and people came to visit and stayed for weeks.

Some historians consider Jefferson an enigma, but that is because they can’t keep up with him. It is true he had no fondness for slavery, but in that, he was neither unique, nor uncommon, among his class. He maintained a vigorous slave population on his plantations and could see no alternatives to the institution, in his generation. Jefferson spent his fortune perfecting his house and collections, his wine and his travels and left his heirs so indebted they had to sell off his house and assets. Fortunately, he left behind an intellectual and political legacy that defined American history and the liberties of generations to come.