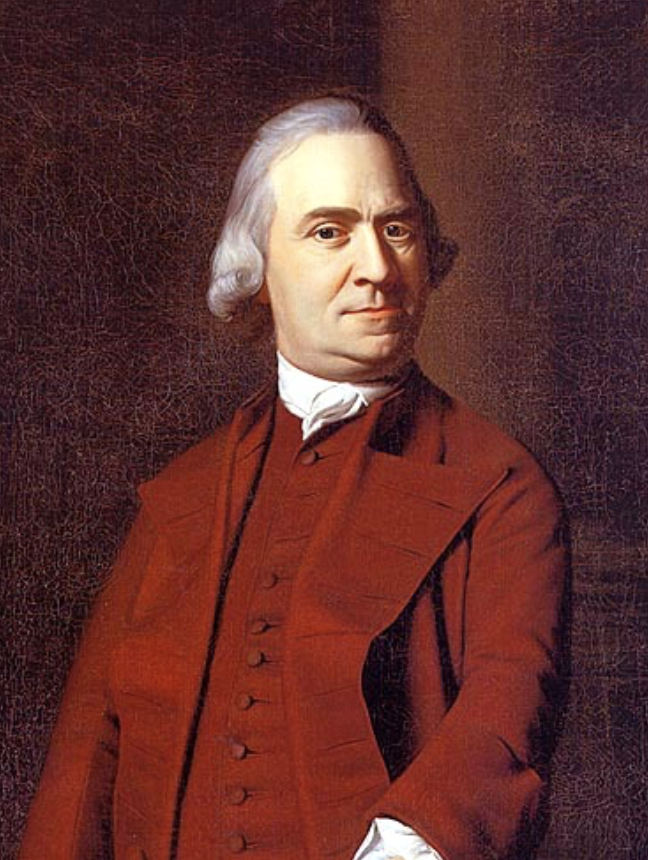 The “Massachusetts malcontent” stands in the very first rank of men whose efforts brought about independence. He became known in America as “the father of American independence” and “the father of the Revolution.” Thomas Jefferson called him “truly the Man of the Revolution.” Samuel, like his cousin John, has been the subject of myth-making and misunderstanding by historians, but his contemporaries had no doubts about the reality of his convictions and zeal for the cause of independence.

A staunch Calvinist and descendent of pilgrims, Adams grew up in a modestly prosperous household. His father served in the Colonial legislature, oversaw a profitable brewery, and raised Samuel to take his place among the educated elites of Massachusetts. Although attempting several business ventures, including the inherited brewery, after education at Harvard, Adams’s real interests lay in rhetorical defense of colonial constitutional liberties and resistance to taxation by Parliament. Not as brilliant as his cousin nor as articulate in print as Jefferson, Samuel Adams could be found in the pubs, homes, and halls of Boston zealously arguing for Colonial rights and motivating others to join the boycotts, petitions, and protests. His language was tempered by his Christian faith and his speeches stopped short of demanding independence till British violence forced his hand.

After rejecting several British attempts of monetary bribery to stop his rabble-rousing diatribes, Adams’s activity became so notorious that the Red-coated occupiers sent patrols out to find him and his fellow patriot John Hancock. The search for them in Lexington led to the first armed confrontation and the “shot heard round the world.” Because his constant political activity took so much of his time, various friends, like Hancock, helped him out financially or his family might have gone begging after he used up most of his patrimony. Men in a hurry, like Samuel Adams, sometimes are neglectful of other duties. Friends bought him a new suit of clothes to wear in Philadelphia at the Continental Congress so he would not look so shabby next to the aristocratic and fashionable rebels possessed of more sartorial self-consciousness.

At the Congress, Adams continued to labor “both by night and by day, with a zeal which was scarcely interrupted, and with an energy that knew no fatigue.” His ever observant and perspicacious cousin wrote that Samuel was “born and tempered with a wedge of steel to split the knot which tied North America to Great Britain.” He seconded John’s nomination of George Washington as military commander. Samuel’s signature on the Declaration of Independence was the culmination of the first fifty three years of his life. But he wasn’t finished.

He persevered in Congress when others faltered or abandoned their place when military fortunes were at a low ebb. He believed that though the Constitution “carried the face of the most exalted freedom,” if the people were “vicious or debauched in manners” Americans would become the most “abject slaves.” In a letter to John Adams he explained his vision for the maintenance of the Republic:

Let ministers and philosophers, statesmen, and patriots, unite their endeavors to renovate the age by impressing the minds of men with the importance of educating their little boys and girls—of inculcating in the minds of youth—the love of their country; of instructing them in the art of self-government . . .and in short, of leading them in the study and practice of the exalted virtues of the Christian system.

He retired from Congress in 1781 to enter the Massachusetts state senate where he and cousin John helped write the state Constitution, which stated that “all persons elected must make and subscribe the following declaration, vis. ‘“I do declare that I believe the Christian religion and have firm persuasion of its truth.’” It is no surprise that with his understanding of man’s inherent sinful and fickle nature, that Adams opposed the Constitution during the ratification period until the opposition promised the inclusion of a Bill of Rights. He served as state governor, a faithful servant in that office from 1794 till his death in 1803 at the age of eighty two. He is buried in the Old Granary Cemetery near Boston Commons, with two other signers of the Declaration, known more today for his connection with his father’s brewery than that “for fifty years his pen his tongue, his activity, were constantly exerted for his country without fee or reward.”