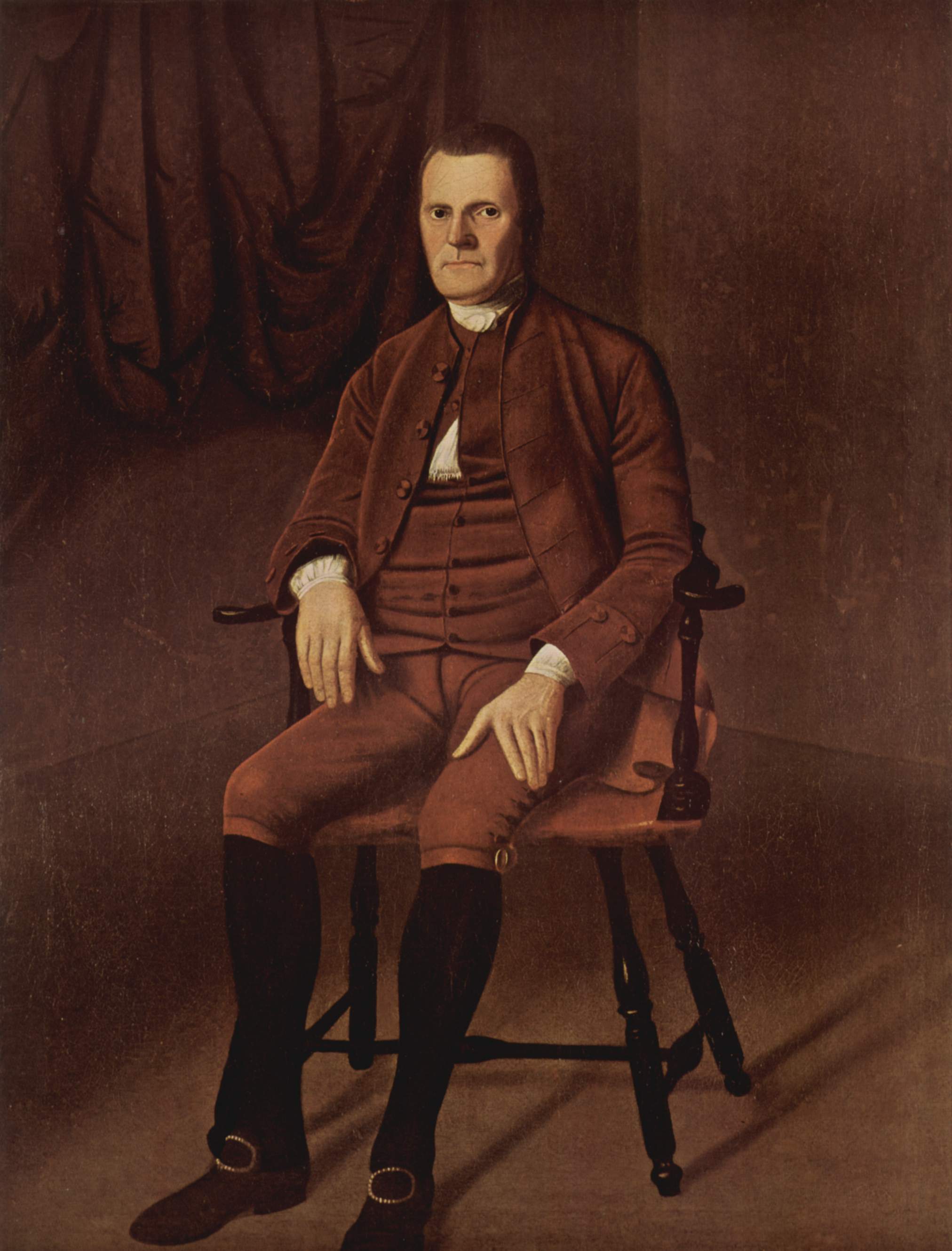 John Adams wrote of him, “The honorable Roger Sherman was one of the most cordial friends which I ever had in my life. Destitute of all literary and scientific education but such as he acquired by his own exertions, he was one of the most sensible men in the world. The clearest head and the steadiest heart.” Despite humble beginnings, born in 1721 to a Massachusetts farmer and shoemaker, Sherman had grown to fill a place of distinction among the great Founding Fathers of the Declaration, and the Constitution. His contribution to the principle documents of the new nation would be a debt no man could repay.

While still a young man he inherited the family profession as a cobbler, but also found delight in mathematics and surveying. At nineteen Sherman’s father died, leaving him as the principle caretaker of the family’s future and fortune. Trail-blazing to Connecticut with his trade tools strapped to his back Sherman moved his family to Connecticut where he eventually acquire the title of ‘surveyor.’

While surveying, he became an expert on handling disputes between landowners, which sparked his interest in law. After passing the bar in 1755 he was appointed local justice of the peace, to the lower house of the Connecticut legislature and later became judge of the court of common pleas. At one point in his life he held a total of nineteen years in the upper Connecticut legislature, and twenty-three years as judge of the superior court of Connecticut. And this was the man who was so committed to his self-education that he would prop his mathematics books before him on his cobbler stool.

In 1774, at the age of fifty-five, Sherman was chosen as a delegate to represent Connecticut at the first Continental Congress. As he entered the hall in Philadelphia for the first time, all of the wigged heads turned to see the humble and bare-headed cobbler from Connecticut. Although he didn’t seem like much, Sherman was one of those choice delegates appointed to the drafting committee for the Declaration of Independence.

Jefferson [once] recalled this of his association with Sherman: “I served with him in the old congress in the years 1775 and 1776: he was a very able and logical debater in that body, steady in principles of the revolution, always at the post of duty, much employed in the business of committees, and particularly, was of the committee of Dr. Franklin, Mr. J. Adams, Mr. Livingston, and myself, for preparing the Declaration of Independence. Being much my senior in years, our intercourse was chiefly in the line of our duties. I had great respect for him.

Many years later, Sherman’s contribution to the Constitution in 1787 would stamp such a lasting effect on America that Connecticut would be known as “The Constitution State.” Known now as the “great compromise,” it was Sherman who suggested a representative house, and a senate. The representatives were to be voted into office according to the size of the state while only two senators were elected in each state, regardless of size and population difference. This efficient form of representation has been in working order for the last two hundred years.

Elected to the US House of Representatives 1789 at the age of sixty-eight, Sherman also played a key role in preparing the Bill of Rights. Sherman said of the Constitution, “Perhaps a better could not be made upon mere speculation: it was consented to by all the states present in the convention, which is a circumstance in its favour, so far as any respect is due to them… I hope that kind Providence, which guarded these states through a dangerous and distressing war to peace and liberty, will still watch over them, and guide them in the way of safety.” During his years in Congress he also focused his time on finance and the problems of printing too much paper money. This issue would be a continuing debate through to the Civil War.

Surrounded by his fifteen children by two marriages, Sherman passed away in the year 1793 at the age of seventy-two. A detailed inscription decorates his gravestone: “He was a man of approved integrity; a cool, discerning Judge; a prudent, sagacious politician; a trued, faithful, and firm patriot. He ever adorned the profession of Christianity which he made in youth; and, distinguished through life for public usefulness, died in the prospect of a blessed immortality.”

The renowned evangelist Jonathan Edwards said of Roger Sherman, “He was exemplary in attending all the institutions of the gospel, in the practice of virtue in general, and in showing himself friendly to all good men.” These words give only a small picture of the true and noble character of Roger Sherman: cobbler, lawyer, and patriot.