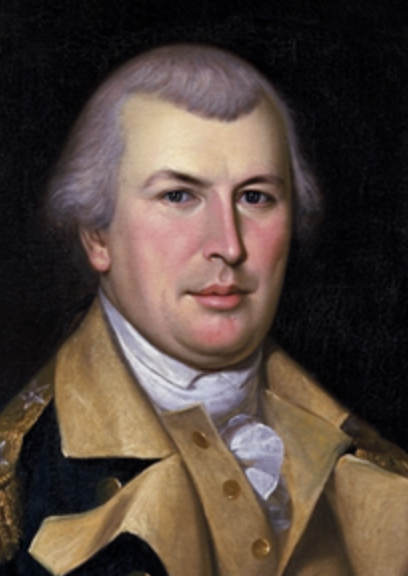 George Washington considered Nathanael Green his most trustworthy General in the Revolutionary War. Like Washington his mentor, Greene did not always win his battles and he committed occasional strategic errors; but he always retained the devotion of his men and, in the end, won the victory that counted. When the war ended, Greene’s military reputation was second only to Washington’s– Not bad for the youngest general in the army, an asthmatic iron monger from a pacifist sect, hobbled with a congenital knee problem, and whose only prior experience involved recruiting state militia.

Nathanael Greene’s Quaker family fled Massachusetts for Rhode Island a century before his birth. His parents opposed much book-learning.Nathanael, nonetheless, developed his mind as a brilliant autodidact, reading voluminously, mastering mathematics, and acquiring a profound knowledge of classical literature and history. He received tutoring from the Rev. Ezra Stiles, who would later become the president of Yale. Greene worked in his father’s iron foundry until 1773 the same year he was kicked out of the Quaker Meeting for attending a military parade. Among Greene’s Boston friends and acquaintances was the bookseller Henry Knox with whom he discussed military history. Their friendship would mature as they became fellow officers of the highest rank under Washington. History is often made by a conspiracy of friends.

With war on the horizon he bought as many military treatises and related books as he could and studied the arts of war. As a popular local businessman and leader, he raised a militia regiment for service in the defense of Rhode Island. At the siege of Boston Greene demonstrated an ability to get along with inter-colonial rivals and, most importantly, developed an important personal relationship with Washington. Greene later took command of a brigade of Rhode Islanders, leading them in part of the Long Island/New York Campaign. The disaster at Fort Washington was largely his fault but he redeemed himself in the Battle of Trenton. His commander in chief had so much confidence in him he sent General Greene as liaison to Congress and, after the difficult winter at Valley Forge, made Greene the Quartermaster General, hoping to restore the supply and confidence of the army. His extraordinary administrative skills, construction of field supply depots and improvements in the transport system helped keep the American Army in the field. He also commanded the right wing of the Continental Army with skill and elan in the Battle of Monmouth.

General Greene’s political enemies inside and outside Congress tried to get rid of him by reorganizing the Quartermaster Department and bad-mouthing him to influential congressmen. When Congress refused his request for a formal vote of confidence, Greene resigned as Quartermaster in 1780 in the midst of the nadir of the military fortunes of the Patriot cause. A brutal winter, combined with the anti-Greene political intrigue in Congress, General Washington’s stalemate outside New York City, and the southern campaign coming to grief at Camden, South Carolina, all bolstered British fortunes and Tory support. At that crucial moment when the Cause seemed all but lost, Washington turned to Nathanael Greene to lead a small American army south to recover patriot fortunes in the Carolinas.

From December 1780-December 1781 Major General Greene fought the British to a standstill in the Carolinas. American victories by Daniel Morgan at the Cowpens and by the over-the-mountain men at Kings’ Mountain combined with renewed successes in the field under Francis Marion and Light Horse Harry Lee forcing Lord Cornwallis to move into North Carolina after Greene. The veteran American Continentals fought a fierce battle at Guilford Courthouse and withdrew after inflicting severe losses on the red-coat army. Greene returned to South Carolina for two more years of bold hit and run raids and strategic control of the invader’s garrisons while Cornwallis marched off to his fate at Yorktown, Virginia.

Following the war General Greene retired, to the plaudits of a grateful nation. He became the doting and forgiving father to his children, faithfully raised by his wife Katy while he had been off fighting the war for eight years. The war and bad investments had cost him great amounts of his fortune and the post-war life of Greene was anything but idyllic. The Greenes moved to land donated by the state of Georgia and there built the home the General would live in the rest of his life. Only three years after the end of the war,Nathanael Greene died of heat stroke at his new home.

General Nathanael Greene lost a number of tactical battles but never a significant strategic one. Assessments by historians include recognition of Greene’s “ability and military values” and “his keen insight into the heart of Cornwallis’s blunders and . . . skillful use of guerrilla troops . . . [which] stamp him as a general of patience, resolution, and profound common sense.” Like all men, Greene had his faults and weaknesses but, like Washington, he refused to lose, and was the last man standing when the British threw in the towel.

Recommended for further reading:
Washington’s General:Nathanael Greene and the Triumph of the American Revolution by Terry Golway
1776 by David McCullough