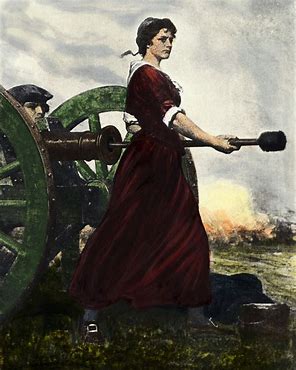 There likely never existed a singular young woman during revolutionary times that went by the name of Molly Pitcher. In fact, the legend was probably based upon an assemblage of women who literally “carried water” onto the battlefield for soldiers hence the surname “Pitcher.” The water was needed not only to quench their thirst, but also to cool down battle weaponry such a cannons and gun barrels.

But what then of the name “Molly?”

Born in 1754 in Philadelphia, Mary Ludwig went on to marry a barber who was called into service in a Pennsylvania regiment. She elected to follow her dear husband, William Hayes, into battle (Battle of Monmouth, Philadelphia Campaign of 1777-1778) in New Jersey wherein the troops endured a bitterly frigid winter at Valley Forge.

Mrs. Ludwig Hayes was part of a ladies’ group led by Martha Washington who were charged with lending aid and sustenance to the troops encamped there.

As the story goes, while Mary, commonly nicknamed “Molly,” was performing her customary duties as water carrier, her husband sustained injuries. Without missing a beat, according to eyewitness accounts, the dutiful wife stepped right into her husband’s role and began loading artillery! In fact, none other than the Commander of the Continental Army and soon-to-be first president of the United States, George Washington is believed to have witnessed this great feat nimbly performed by “Molly Pitcher.” To be noticed by the very Father of our great republic for such a heroic deed certainly makes this young woman worthy of note in our grand and storied history.

Joseph Plumb Martin, a soldier and contemporary of Mrs. Hayes is quoted here describing her actions:

In 1793, a few years after the death of her husband, Hayes entered into marriage with John McCauley, who had also fought during the Revolution. Their marriage is said to have been fraught with conflict and even violence on the part of her husband. To add insult to injury, this union was also believed to have left Mrs. McCauley impoverished. Long after her notoriety as an angel on the battlefield and even more importantly, a brave warrior, she found herself endeavoring to make a living as a domestic.

Fondly regarded as “Sergeant Molly,” by her neighbors in Carlisle, Pennsylvania, she continued to dwell there until her death in 1832. Just ten years prior, she was finally awarded a $40 a year pension for her service to the nation. And as a final tribute to “Molly Pitcher” and all the other water carriers whose services were indispensable to the revolutionary cause, a grand statue was erected alongside her grave in Pennsylvania. And in front, as would only be fitting, stands a cannon, most assuredly representing that fateful day when she courageously stepped directly into battle herself!