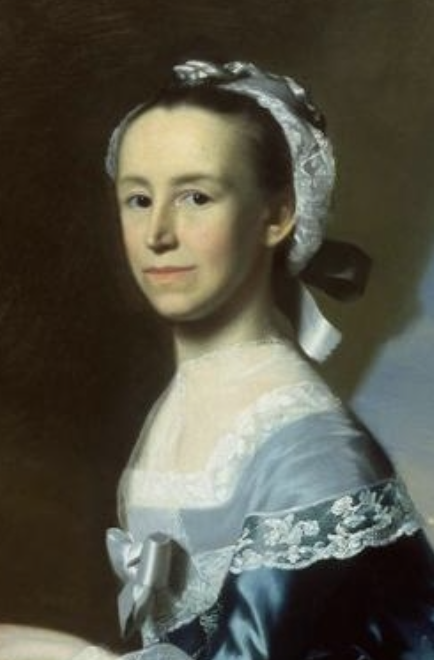 Born to a prosperous Cape Cod family, Mercy became a crucial instigator in sparking the fires of the American Revolution with her propaganda and persuasive political prose. Although she received no formal education, she would often eavesdrop on her brother’s private tutoring in order to learn to read and write. Her brother, James Otis, went on to study law at Harvard and later became a significant proponent in the war for independence. He is most noted for coining the phrase “no taxation without representation,” which became the founding slogan for the patriotic cause.

In 1754, Mercy married Massachusetts delegate James Warren and together they had five sons. The Warrens became increasingly involved in the conflict between the American colonies and the British government. Over time, their home became a meeting place for local politics and revolutionaries including the Sons of Liberty. With the assistance of her friend Samuel Adams, Mercy hosted the meetings that laid the foundation for the Committees of Correspondence. Due to her close proximity to political leaders and events, Mercy was very well-informed on the developing arguments and issues of the day and soon became a renowned historian. Her husband encouraged her to write, fondly referring to her as the “scribbler” and she became his chief correspondent and sounding board.

Like Abigail Adams, Mercy publicly defended political rights for women. She posited that women did not have inferior intellect, but simply were given no opportunity to display their brain power. In a letter to James Warren, John Adams wrote, “Tell your wife that God Almighty has entrusted her with the Powers for the good of the World, which, in the cause of his Providence, he bestows on few of the human race. That instead of being a fault to use them, it would be criminal to neglect them.” Indeed, Mercy did not neglect her talent in writing and soon published numerous political poems and two plays that explored relevant issues such a liberty, representation, and moral values. Her work earned the congratulations of numerous prominent men of the age, including the brilliant Alexander Hamilton, who remarked, “In the career of dramatic composition at least, female genius has outstripped the Male.”

After a prosperous and successful life, Mercy Otis Warren died on October 19, 1814 at age 86. Providentially, her legacy as an influential author and extraordinary woman of the revolution continues to be remembered. The SS Mercy Warren, a World War II Liberty ship launched in 1943, was named in her honor. In 2002, she was inducted into the National Women’s Hall of Fame in Seneca Falls, New York. She is also remembered on the Boston Women’s Heritage Trail. Although she was just a woman in a time when the female role in society was heavily limited, Mercy discovered that the pen was mightier than the sword and bravely fought with ink.