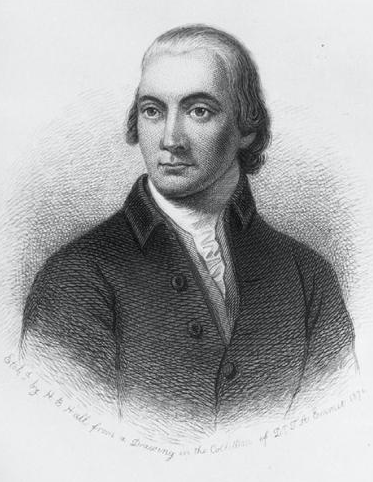 Connecticut born and bred, Yale educated, Hall joined others of the New England diaspora that migrated south looking for new economic opportunities in colonies with more temperate climate, more scattered population and potential opportunity for public service. Hall ended up in St. John’s Parish in coastal Georgia among others of New England patrimony, but surrounded by counties loyal to the crown and disinterested in rebellion or independence.

Hall’s education aimed at the Gospel ministry and to that end he actually acceded for a while. Deciding that the church was not his calling after all, the Connecticut native settled on medicine as his new pursuit.

Newly married to his second wife and with one child Hall headed south to the Carolinas and then to Georgia, where he established a successful medical practice and farm among the malarial lowlands of the Midway district.

Having been educated in the independent-minded, liberty loving New England intellectual soil, the encroachments of the Parliament and King on the constitutional privileges of the colonies inspired Lyman Hall to loudly protest to his neighbors and colony, advocating boycotts and non-importation. His infectious rhetoric appealed to his neighbors but not to the denizens of neighboring counties. It appeared his colony would ignore the rebelliousness of those to the north, so Hall appealed to his own county to send him to the First Continental Congress, where he arrived as a representative of only one county in Georgia. He was given non-voting recognition—a minister without portfolio.

Others in the southernmost county, in the meantime, attracted enough discontented Georgians to send several other representatives to the Second Continental Congress to join the outspoken and dedicated patriot, Hall. While serving in Congress during the war, his plantations were ravaged by the British in 1778. He brought his family up to weather the storms in Connecticut while he continued to serve in Congress till 1780. When the British evacuated Savannah in 1782, Lyman Hall returned to Georgia to try and recoup his fortune which he had pledged and lost.

With his formidable intellect and dedicated service in the Congress on his resume’, Lyman Hall returned to Georgia where he was elected Governor for a term and later served as a legislator, judge, and trustee of Franklin College, which eventually became the University of Georgia.

John Adams recorded that when Lyman Hall and Button Gwinnett joined the Congress, they were “a powerful addition to our phalanx.” Without Hall’s singular early dedication to the cause, and his willingness to go it alone on behalf of reluctant Georgians, perhaps that state would have ended up missing from the battle for independence altogether.