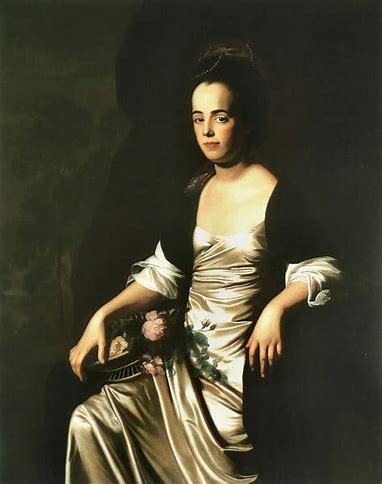 Judith Sargent Murray was a force with which to be reckoned and a woman more than a century ahead of her time. She used her considerable talents and communicative skills to fight for the advancement of her female counterparts of the day. Long before the era of modern feminism, this brave lady blazed a trail for those who would come after her with a common sense reasoning that appealed to men as well as women.

Judith was born on May 1st, 1751 in Gloucester, Massachusetts. She was the eldest of eight children and was born into a wealthy “merchant” family. She took full advantage of her family’s extensive library to educate herself well-beyond the standard offering of the day for young ladies (reading and writing). She even flourished as a poet at the tender age of nine. And as many a proud papa is wont to do, her father enjoyed showing off her creative works to family and other acquaintances.

In 1769, she was betrothed to Ship’s Captain John Stevens. They set about immediately to raise his nieces and her cousin as their own since the children had become orphaned. When the shipping business encountered financial trouble, Judith attempted to sell her writings using a pen name. Unfortunately, she had little success supporting her family with this earnest endeavor. In order to avoid incarceration in debtors’ prison, her husband “relocated” to the West Indies and sadly, died there in 1786.

Later, she married John Murray, a Unitarian/Universalist Pastor. His occupation coupled with the required travels involved proved providential for the couple as they encountered and made the acquaintance of a host of prominent leaders such as; Benjamin Franklin and George and Martha Washington. These connections would provide Judith with support for both her literary works as well as her revolutionary ideas about women as more than just cooks and cleaners. In fact, one of her most compelling arguments for a more substantive education for girls involved the common-sense idea that if it was imperative that men who had voting rights be “educated and virtuous,” then the women who raised them must also be well-educated. Sound logic indeed! Sadly, at that time, it was a commonly-held sentiment that women’s brains were somehow inferior to that of men. Murray argued that it was rather the inferior educational opportunities afforded girls that held them back, certainly not some unproven anatomical/structural anomaly. Why even the very gifted Abigail Adams supported the innovative ideas of Judith Sargent Murray!

She wore many hats during her lifetime, including that of playwright when she penned a play titled The Medium in 1795. It is said to be the first play performed on an American stage by a female author. Though she thought it wise to use a male pen name to write The Gleaner which was featured in a column she wrote for Massachusetts Magazine, she certainly must have been most proud of her accomplishments regarding the advancement of women in a society that generally regarded them as second-class non-citizens.

Seems it true that “we’ve come a long way, baby,” thanks to such courageous and outspoken trailblazers as Judith Sargent Murray.