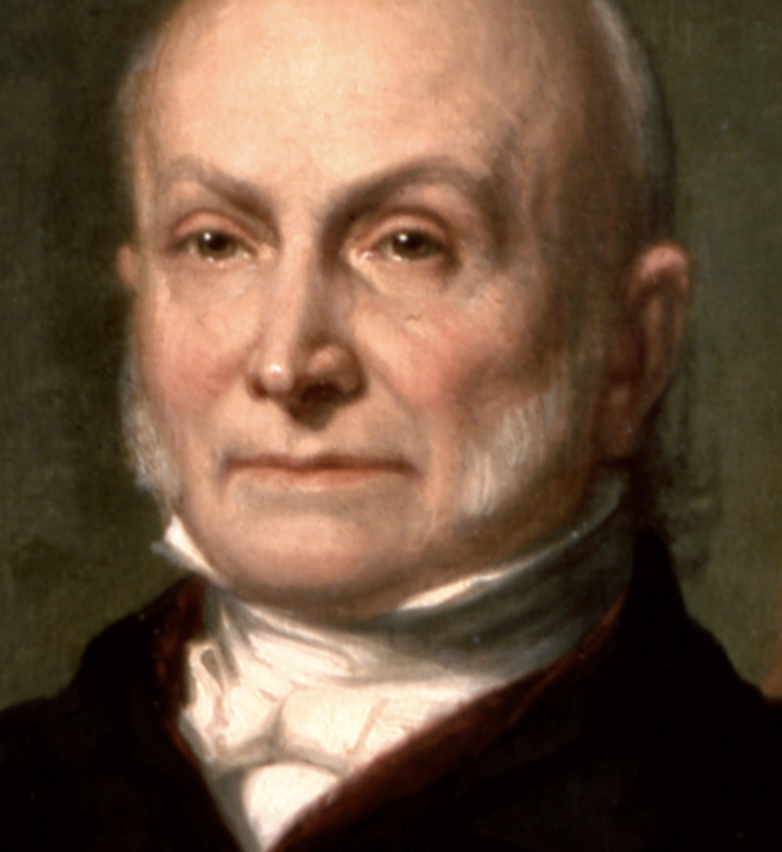 More a founding son than a father, Adams would live well into the 19th Century, the most brilliant link in a chain of Adams men distinguished for two centuries in many avenues of American politics, society and culture. As a young teenager, Adams would contribute significantly to the foreign policy successes of the early Republic and later take his place as President of the United States, son of a President. He kept a personal diary for sixty nine years, which runs to fifty volumes.

As the oldest son of John and Abigail Adams, John Quincy received the attention of two exceptional tutors and then travelled with his father on diplomatic missions during the War for Independence. He attended Leiden University in Holland and in the course of his European sojourn became fluent in French and Dutch, Latin and Greek, in the latter language he translated the New Testament his first year in college. At the age of fourteen he accompanied Francis Dana to the Russian court in St. Petersburg, where he served as translator for Dana, in French, the international language of diplomacy. Adams thus helped establish a positive and useful relationship between the United States and Russia which lasted until the Russian Revolution, over a century later.

While with his father in France, he became close friends with Thomas Jefferson, a relationship that lasted a lifetime and eventually precipitating his leaving the Federalist Party. Following his tenure as a founding son, he attended Harvard College, acquired his Master of Arts and passed the bar exam, opening a law practice in Boston in 1791. George Washington appointed John Quincy as Minister to the Netherlands; on the way he met with John Jay in Britain, negotiating a new Treaty with Britain. After his mission in the Netherlands, Washington appointed Adams minister to Portugal. John Quincy finally reconciled himself to a life of public service, married, and took up his new post as minister to Prussia under his father’s presidency.

Upon his return to the United States, John Quincy Adams served in a variety of offices in his native state of Massachusetts and in the United States Senate. Under Jefferson’s Presidency, Adams lost his home political support because he approved of a number of the President’s decisions, which resulted in his short tenure in Washington. He returned home to teach at Harvard but was re-called in 1809 by President Madison to serve as minister to Russia. Because he was plain-spoken like his father, Adam’s wife Louisa Catherine helped smooth his way through the social quagmires of European courts and social requirements that bored and disconcerted the veteran minister.

He served as Secretary of State under Monroe, and a more experienced and successful man than he has never held that post. He authored the “Monroe Doctrine” which has defined aspects of American foreign policy till today. By 1824 the virtual one party state had divided into factions and New England backed the foreign policy expert and son of John Adams for President. When the powerful Kentucky Senator Henry Clay threw his support to Adams, his election was secured.

Adams’s “States Rights” political enemies stalled many of his policy proposals in Congress. He ran afoul of prevailing sentiments regarding Indian policy (he tried to stall land seizures and sales), slavery (he was totally against it), internal improvements (he supported federal funding), and tariffs (he wanted them high to protect American industry).

Upon Andrew Jackson’s victory in 1828, John Quincy Adams did not go quietly. He entered Congress as a representative of Massachusetts two years later and served for five years, dieing on the floor of the House of Representatives at the age of seventy eight.

Adams much preferred sitting by his own fireplace reading books, to anything else in the world. But Providence had determined he should be a founding son and a mentor to the Republic his entire life. His 14,000 volume library can be visited today, a tribute to his devotion to learning and he a great example of wise application.