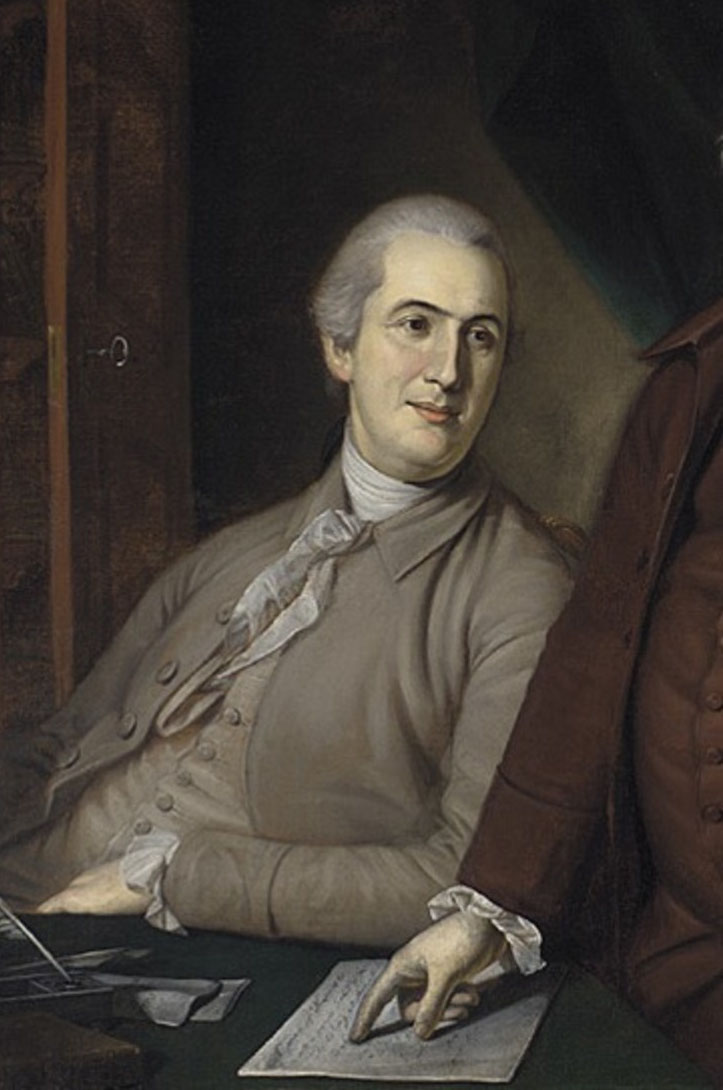 His first name means governor in French; Abigail Adams said it is pronounced “Gouveneer.”He was a ladies man and considered a rogue by some of his peers, at least until he married at fifty-seven. He lost his leg in a carriage accident at thirty-two fleeing an irate husband. The woman he married was his house-keeper and a relative of Thomas Jefferson, accused of adultery and murder at her sister’s plantation known as Bizarre. He beat off a French Revolutionary mob with his crutch. He died from a self-inflicted wound attempting to install a whalebone catheter. And, he also signed the Articles of Confederation and gave 173 speeches at the Constitutional Convention. Morris was a close friend of George Washington and Alexander Hamilton, wrote the Preamble and was considered the “pen” of the Constitutional Republic—he is one of the most important Founding Fathers, feet of clay, roving eye, and all.

Gouverneur Morris was born to privilege and wealth in New York, the only child of a second marriage. He enrolled at King’s College (later Columbia) at the age of twelve. He was admitted to the bar after learning from one of the best legal minds in the colony and an opponent of English tyranny. He joined with patriots John Jay and Alexander Hamilton in the incipient rebellion and was thus forced to go against his mother (who gladly turned over the estate to the British army for their use), half-brother who was a British General, and many men of his social strata whose wealth depended on British trade and loyalty to the crown. He joined a local militia company in 1776 but left to serve in the political end of the “revolution.” His polemical skills and outspokenness, as well as his absolute devotion to the cause made him indispensable to New York’s remaining in the fight. The new state constitution was mostly his work, the political solutions to military problems his specialty.

Morris took his seat in the Continental Congress in 1778 and was immediately given the task of working out military reform with George Washington. “His support for Washington, Nathaniel Greene, and Frederick von Steuben contributed directly to the success of the training and structural reforms thrashed out in the snows of Valley Forge and the meeting rooms of Congress.” His outspokenness and use of sarcasm advocating a stronger central government lost him his Congressional seat in 1779. Morris responded by moving to Philadelphia and hitching his star to the preeminent Patriot financier Robert Morris (no relation). Together they stabilized Congressional finances and funded the Yorktown Campaign.

The high point of Morris’s career came when Pennsylvania elected him to the Constitutional Convention in Philadelphia to revise the Articles of Confederation. For a change, he became the soother of ruffled feathers and the wise promoter of judicious compromise. He fought hard on behalf of religious liberty, the right of property as the foundation of society, rule of law, and consent of the governed. His solid opposition to slavery failed to gain any traction. Morris was the principle draftsman of the final version of the Constitution.

Following the successful ratification of the Constitution, Morris spent the next ten years in Europe on business and serving President Washington in diplomatic positions, including ambassador during the French Revolution. Upon his return to America he allied with Alexander Hamilton and fought for Federalist Party issues. He was also indispensable to the creation of the Erie Canal in New York. Gouverneur Morris was buried in a church in the Bronx; his wooden leg is on display at the New York Historical Society, of which he was President. Millions of American children have quoted Morris’s most famous words, without knowing of their origin:

We the people of the United States, in Order to form a more perfect Union, establish Justice, insure domestic Tranquility, provide for the common defence, promote the general Welfare, and secure the blessings of Liberty to ourselves and our Posterity, do ordain and establish this Constitution for the United States of America.