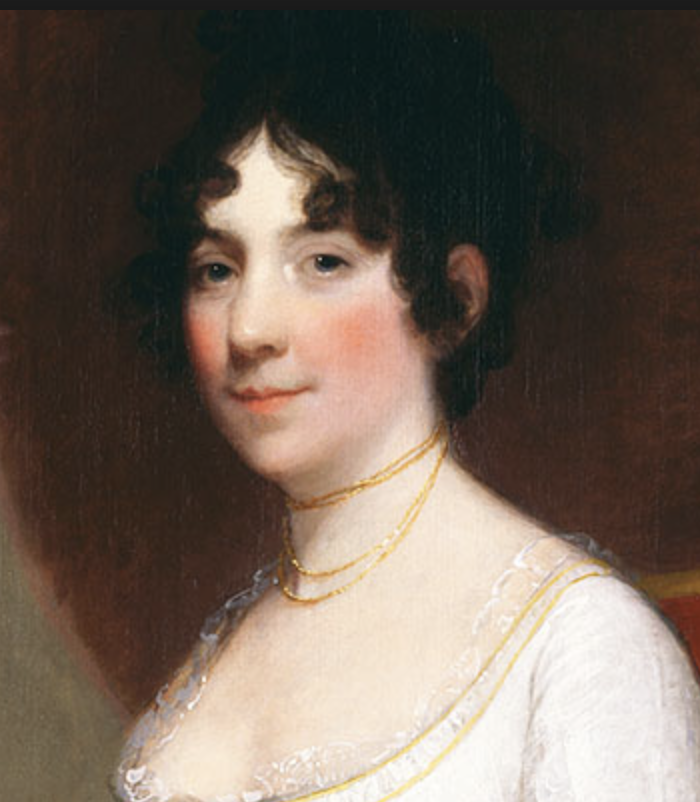 Born in a Quaker settlement in North Carolina on May 20, 1768, Dolley Payne was the first daughter of Mary Coles Payne and John Payne Jr. Her father was not Quaker but joined the Quaker faith in order to marry her mother.

Shortly after she was born, the Paynes moved to a beautiful, rural plantation in Virginia. While growing up in the lush landscape of eastern Virginia, Dolley played alongside her sisters Lucy, Anna, Mary. She also had four brothers named Walter, William, Isaac, and John.

After the Revolutionary War, Dolley’s father emancipated his slaves and moved to Philadelphia to start a business as a merchant. Her father soon tragically died, leaving her mother to open a boardinghouse to support the family. Aaron Burr was one of the Payne house residents, who later formally introduced Dolley to her second husband, James Madison.

When she was 21, Dolley married John Todd, a Quaker attorney, and together they had two sons.

However, during the yellow fever epidemic, Todd became ill and died, along with her 3-month-old son, William.

As a young widow with a son to support, Dolley Payne Todd’s future seemed bleak. Although Dolley and James Madison may have known of each other from socials and other political encounters, Aaron Burr, a college friend of Madison’s and a boarder in Dolley’s family house, introduced the pair in May 1794. Madison, a confirmed bachelor 17 years her senior was instantly captivated with the young woman and proposed to her three months later. Since her husband was not a Quaker, she left her faith and joined the Episcopal church.

Less than a year after losing her first husband and son to fever, Dolley married James Madison. The new family resided in Montpelier until the newly elected Thomas Jefferson asked Madison to serve as his Secretary of State. At once Dolley set to entertaining the politicians in Washington and made a name for herself as one of the best hostesses around. In fact, the widower Jefferson was so impressed that he asked if she would help plan and host presidential functions and parties.

When Jefferson retired from presidency, Madison was elected next, serving from 1809-1817. Dolley continued in her hostess duties. She was known for her lavish parties and social graces as an accomplished and hospitable woman, and contributed tremendously to her husband’s popularity in Washington, which led to him serving two terms as president.

Unfortunately, her son from her previous marriage, Payne Todd, was a source of great stress. Instead of pursuing a career, Payne preferred to gamble and drink In order to shield his wife from the stress and financial ruin he was bringing to the family, Madison did not let Dolley know the extent of her son’s debts.

To pay for Payne’s mistakes, Madison was forced to sell land he owned in Kentucky and mortgage his home. After James Madison’s death in 1836, Dolley sold some of his papers and letters to congress to help pay for Payne’s debts. After years of serving her country as an unofficial but effective “diplomat,” the incomparable Dolley Madison was essentially left penniless at the end of her life due to her son’s errors. And yet, her indomitable spirit remained.