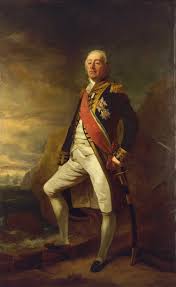 France did not send just anybody to aid the American cause against Great Britain. Comte de Grasse, one of France’s finest admirals not only sailed for America, but lived up to his grand titles and name, driving Britain’s fleet from the Chesapeake Bay and sealing the fate of Lord Charles Cornwallis’s army at Yorktown, Virginia in 1783. His is a name that should adorn the highest ramparts of our national edifice of heroes.

De Grasse, a younger son in a noble family, entered the Order of St. John, the Hospitallers of Crusader fame, as a page, at the age of 11. He served aboard their ships as an ensign until he entered the French navy at 19, in plenty of time to be involved in The War of Austrian Succession, better known in America as “King George’s War.” De Grasse earned his pay fighting in the Battle of Toulon in which the Spanish-French fleet routed the British, an agonizing embarrassment for the world’s foremost naval power.

As the Americans fought for their independence, France sat back to watch, hoping for the defeat of their historic enemy. American diplomats Benjamin Franklin, Thomas Jefferson, and John Adams subtly and not so subtly beseeched Louis XVI and the French Court to come to the aid of the Americans with loans and army and naval support. In the Treaty of Alliance agreed to in 1778, France agreed to bring their forces to American aid. The comte de Rochambeau led the French army to join George Washington and the fleets of Count d’Estaing, under whom de Grasse served, sailed for the Caribbean. Throughout 1779 de Grasse distinguished himself in a round of battles in the West Indies against the fleet of Admiral Rodney.

Promoted to Admiral and given independent command, de Grasse defeated the English under Samuel Hood and captured Tobago. Those successes were but preliminary to his greatest achievement. George Washington planned to march his army, including Rochambeau’s French veterans, from the New York area to Yorktown, Virginia where Lord Charles Cornwallis had fortified his troops to await reinforcements and relief from the British fleet. De Grasse informed Washington that if he moved within a certain window of time, the French fleet might be able to intercept the British relief forces before they could get to Yorktown.

As Providence would have it, de Grasse with twenty-eight ships of the line, was able to land 3,200 troops to assist Washington, then set upon the British fleet at the mouth of the Chesapeake Bay. In a running gunfight known as the Battle of the Capes, de Grasse’s ships blazed away at the nineteen ships of the line that Admiral Graves was able to bring into line of battle. Both sides took casualties but, in the end, the British fleet got the worst of it and drifted away from the Bay and returned to New York.

Yorktown fell to Washington’s army but he gave full credit to de Grasse, for without him, the result could have been wildly different. De Grasse returned to the West Indies, where he not only lost a battle but was captured by the British. While a prisoner in London, he was sent to be part of the negotiations that resulted in the Treaty of Paris and the end of the war. The Memorial at Cape Henry in Virginia extols the triumph of de Grasse in the Battle of the Virginia Capes, without which, American Independence might not have been secured.