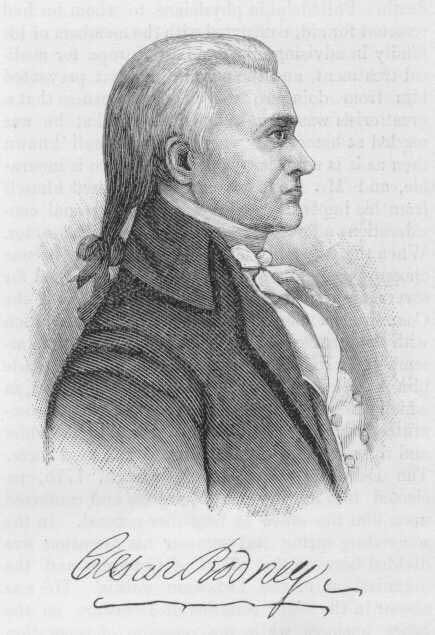 Home-schooled and the oldest in a family of eight children, Rodney took over the family’s eight-hundred-acre farm at the age of seventeen and helped his widowed mother train the other children until his late 20s, when he began public service. And when he began that service, he never stopped till the day he died at age fifty five. No one in the history of Delaware, to this day, has held as many offices as Caesar Rodney. It was not easy living for the patriot representative. Not only were there many Tories in the population, they may have been a majority. Rodney suffered from a cancer in his nose and face which marred his visage to such an extent, he wore a green silk veil over half his face. He suffered from asthma and gout, sometimes leaving him unable to walk. Not one to sit idle in hard times, he also commanded the Delaware patriot militia army on several occasions and rose to the rank of General.

Delaware sent Rodney to the first Continental Congress where John Adams mentioned him with only two others as “seeing more clearly to the end of this business than any others in the whole body. At least they were more candid and explicit than any other.” In 1775, his colony elected him Brigadier General and he thus had to split his time between Congress and quelling Tory uprisings at home. His integrity and “highmindedness” resulted in one of the most dramatic incidents of the Second Continental Congress.

Caesar Rodney was at home eighty miles from Philadelphia and ill. The date was June 7th, 1776 and Richard Henry Lee had introduced the famous resolution that the colonies “are, and ought to be, free and independent states…and all allegiance to the British Crown…ought to be dissolved.” Everyone understood that the vote for independence the next day, required unanimity. Each colony had one vote. Delaware was deadlocked one for one against. A rider was sent to summon Rodney, the staunch patriot. He rose from his sick bed when the messenger arrived, saddled his horse and set out through a thunderstorm, riding all night long, and arriving just as the delegates were being seated. Arm in arm with Thomas McKean, Rodney walked in and took his place. When the vote came round to Delaware, Rodney struggled to his feet and said “As I believe voice of my constituents and of all sensible and honest men is in favor of independence, and my own judgement concurs, I vote for independence.” On August 2nd, the tall, thin, odd looking Rodney signed the Declaration and, despite his sickness, “his eyes blazed with an indomitable spirit.” Like his namesake, he had crossed the Rubicon.

Rodney’s colleagues thought highly of the Delaware representative. John Adams described him as a man of “sense and fire, spirit, wit, [with] a humor in his countenance.” Following General Washington’s orders, he led the state forces against the British when they invaded Delaware. Rodney served as “President” of Delaware for several years, struggling with ill health as the cancer spread and finally took his life in 1784, less than a year after Independence had been secured. A lifelong bachelor (one of only two in the Congress) Rodney’s legacy of faithfulness and struggle for liberty were left to the memories of the people of Delaware, whom he served.