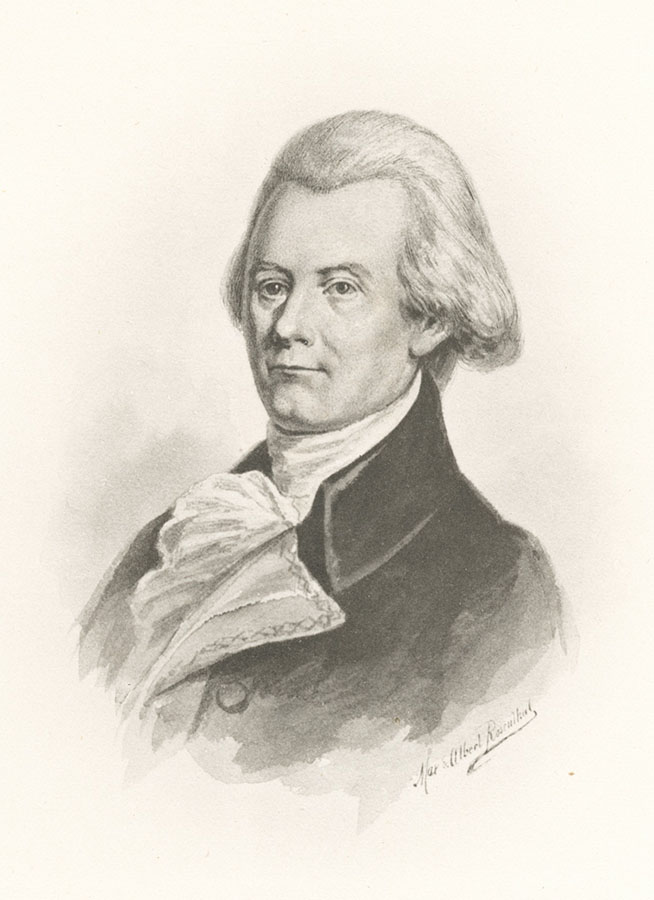 Georgia would become the largest state east of the Mississippi River (which it still is), and the most populous in the South until the invention of air conditioning and Mickey Mouse. In 1787, however, the state was still terra incognita to most Americans. It was the youngest of the North American British colonies and most of the inhabitants had migrated there from the other twelve to the north. William Few was no exception. He was an exceptional man, however, and holds a unique place in the lineup signers of the U.S. Constitution. In some ways, he is the exemplar of an American man.

Unlike most of the other signatories of the Constitution, William Few came from humble beginnings. Born to a Quaker farm family in Maryland he received only two years of formal education before his adult years. His family moved to North Carolina looking for an opportunity to better themselves on more productive land. One can never predict what influence on a young person’s life will become a decisive factor in defining his future. For Few, his second teacher, at the age of twelve, and for only one year, infused into the young farm-boy a love for reading and self-improvement. By the time he was sixteen, Few was reading every book he could get his hands on and spending time at the courthouse listening to cases being argued (as the young Patrick Henry had done). At nineteen his father gave him a plot of land to plow for himself, but he always carried a book with him to the fields. An autodidact of the most diligent sort, William Few educated himself.

William’s family joined the “Regulator” movement in North Carolina, a large number of western “back-country” farmers and tradesmen who protested what they considered unfair taxation and preferential “treatment, conferred by the Royal Governor to eastern colonial merchants and people with political connections.” Their protests resulted in a pitched battle at Alamance against the Governor and the state militia. The Regulator movement was crushed and William Few’s brother was one of six prisoners hanged by the government. His family fled to Georgia leaving William to fight for their land in the courts. Upon joining his family in Augusta, Georgia, Few joined the militia to fight against Britain in the War for Independence.

As a man of intelligence, legal acumen and leadership quality, William Few rose through the ranks to Lt. Colonel. He fought in several battles and then was elected to help write Georgia’s Constitution. He was sent to Congress in 1780 and then returned to Georgia to open what proved to be a very lucrative law practice in Augusta. He said that he never spent a single hour in a law office or a class before becoming a lawyer. In 1786 he was returned to Congress and then the Constitutional Convention. His fellow Georgia signer of the Constitution stated that “Few possesses a fine natural Genius and from application has acquired knowledge of legal matters.” He gave several speeches in the Convention, and was one of the very few who did not come from wealth and privilege.

While in Congress as a senator, he married a New York woman and also joined Thomas Jefferson’s faction in politics. The man from the farm hated slavery and lost his seat in 1796. He also served as a state Congressman and three terms as a judge in Georgia. Following the ’96 election, Few moved to New York where he was promptly elected to three terms in the state legislature. He became president of City Bank in New York City, having amassed a substantial fortune. William Few died full of years at age eighty and was buried in New York City, later moved to Augusta. Having gone from being a Carolina man of the soil, to one of fortune and fame through hard work, self-discipline, reading, fighting, developing strong leadership qualities, and uncompromising principles—Few is one of not a few American success stories whose signature on the United States Constitution has real meaning as a practical example of liberty untrammeled by government regulation.