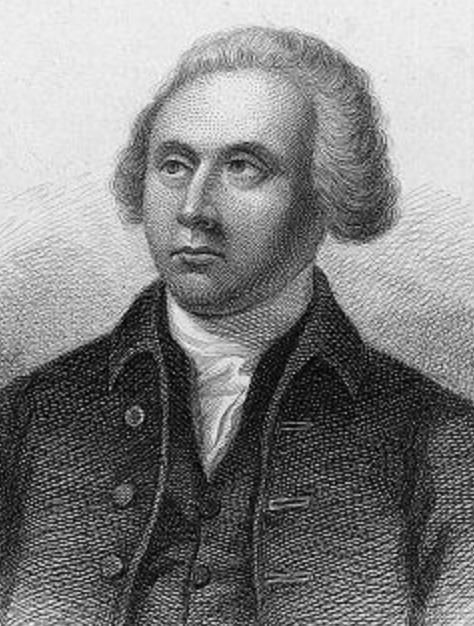 Although battling serious spells of asthma, direct British attacks on his hometown, and never receiving compensation for his donations to the war effort and independence, Brigadier General Thomas Nelson Jr., nonetheless, lived a full and victorious life to the very end.
In 1738 Thomas Nelson Jr. was born to one of Virginia’s “first families” in Yorktown, and at the age of fourteen sailed to England to receive an education at Trinity College, Cambridge. At twenty-three, on his return home to join in the family mercantile business, he was elected to the Virginia House of Burgesses. One year later, in 1762, Nelson met and married Lucy Grymes with whom he had eleven children.

As the year 1774 neared its end, so did the Virginia House of Burgesses. Out of response to the closed port in Boston Thomas Nelson Jr. and others in Yorktown arranged a “tea party” and toppled some tea barrels into the York River. Although appointed colonel in the Virginia militia, Nelson decided to take his place as a Virginia delegate to the first Continental Congress. Making a motion to approve the resolution made by fellow Virginian Richard Henry Lee, Nelson dipped the quill with other patriots and enthusiastically signed the Declaration of Independence. Nelson represented Virginia as a delegate until 1777 when he was obliged to resign due to severe asthma attacks and a series of strokes. In his work for the Congress he supervised the treasury and helped frame the Articles of Confederation.

However, in the year 1781 Nelson once again joined the fray, but this time with his sword. Succeeding Thomas Jefferson to the Governorship of Virginia, Nelson defended the Old Dominion against British incursions and prepared defenses against the oncoming attacks of General Charles, Lord Cornwallis, who had positioned his army in Governor Nelson’s hometown.

When General George Washington arrived with the American and French armies to lay siege to Yorktown, Nelson joined him with the Virginia militia. He suggested the artillery shell his own magnificent home since it was the greatest in town and would be full of British officers. The enemy scampered from the house and set up headquarters in a cave by the beach. As a testimony to this patriotic and zealous action there are cannon balls still imbedded in the old façade!

Only six months after his election as Governor of Virginia he was forced to resign due to returning poor health. Coupled with this natural misfortune Nelson also bore the burden of $2,000,000 war collateral with which he had paid the troops with his own money and outfitted a cavalry troop. Although never compensated and forced to live in a small home in another county, he later stated that he “would do it all over again.”

Nelson was one of those patriots who embodied the words of the Declaration of Independence where it so boldly stated: “with a firm reliance on the protection of Divine Providence, we mutually pledge our lives, our fortunes, and our sacred honor.” Nelson had applied both his pen and his sword for the cause of freedom and for the hope of future fortune and happiness.

His good friend Colonel Innes testified to the strong character of Thomas Nelson Jr.:
In the memorable year 1781, when the whole force of the southern British army was directed to the immediate subjugation of this state, he was called to the helm of government; this was a juncture which indeed ‘tried men’s souls.’ He did not avail himself of this opportunity to retire in the rear of danger; but on the contrary, took the field at the head of his countrymen; and at the hazard of his life, his fame, and individual fortune, by his decision and magnanimity, he saved not only his country, but all America, from disgrace, if not from total ruin. Of this truly patriotic and heroic conduct, the renowned commander in chief, with all the gallant officers of the combined armies employed at the siege of York, will bear ample testimony; this part of his conduct even contemporary jealousy, envy, and malignity were forced to approve, and this, more impartial posterity, if it can believe, will almost adore.

After years of declining health, the Governor died in 1789, just after his fiftieth birthday. He had given his all for the cause of liberty and independence though the cost was immense in both health and wealth. He died beloved, especially by the soldiers whose service had depended on his personal guarantee and support.