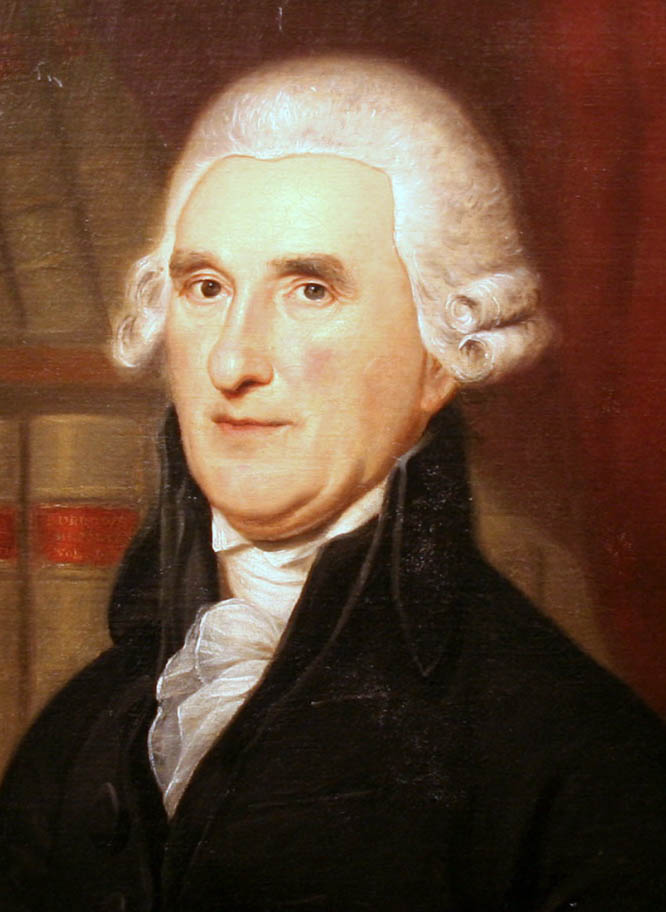 Born to Scots-Irish parents in Pennsylvania, Thomas M’Kean became the ultimate over-achiever in life but gained the distinction of the last signer of the Declaration of Independence. At nine he was placed under the tutelage of the Rev. Francis Allison, whose extensive knowledge of history, law, and politics, contributed much to M’Kean’s training and that of another Delaware delegate to the Continental Congress, George Read.

After finishing his basic studies, the brilliant Thomas M’Kean read law at his cousin’s law office in Delaware, passed the bar, and set up his own practice at the age of twenty-one in his home state and in New Jersey. Rising steadily and confidently M’Kean, practiced law in the courts of common pleas in the counties of Newcastle, Kent and Sussex. He served as a Sheriff, militia captain, customs collector, deputy attorney general, loan office trustee, and judge. Needless to say, M’Kean’s social standing and respect rose beyond most of his peers.

Known for his ramrod straight, six-foot frame, rakish hats, and gold-tipped cane, as well as for his self-discipline, honesty, seriousness and sometimes prickly personality, M’Kean ascended the ranks in the lower house of the Delaware legislature though he lived in Pennsylvania after 1774.

He expressed outrage at the Stamp Act and was chosen to exercise his powers of persuasion at the Stamp Act Congress, assembled in New York in 1765 as a reaction to British taxation. Because of growing tensions between the colonies and unjust taxation by Parliament most of the members of the Congress advocated petitions to rescind. Several delegates balked at sending the petitions and faced severe reprimand by the Delaware delegate.

M’Kean was an elected member of the Continental Congresses, where he served for many years. In 1776 he was chosen to participate in the draft of a document for the confederation between the colonies. In respect to a Declaration of Independence, Thomas M’Kean heartily approved. Although he claimed to have inscribed his name to the original document, the published copy did not include the name of Thomas M’Kean, for which he took the secretary to task:

My name is not in the printed journals of congress, as a party to the Declaration of Independence, and this, like an error in the first concoction, has vitiated most of the subsequent publications; and yet the fact is, that I was then a member of congress for the state of Delaware, was personally present in congress, and voted in favour of independence on the 4th of July, 1776, and signed the declaration after it had been engrossed on parchment, where my name, in my own hand writing, still appears.

It is possible he actually was not a signatory till 1781 when he became President of Congress!
While the Continental Congress was in session and in the process of presenting the Declaration of Independence to the delegates of the colonies, the two delegates representing Delaware, although friends and neighbors, Thomas M’Kean and George Read, opposed one another regarding committing their state to independence. A tie vote meant rejection of the Declaration.

Consequently, M’Kean sent word to Caesar Rodney, the third, but absent delegate, to come as soon as possible and cast his vote in favor of Independence. Immediately upon arrival of the notice, Rodney made his way to the convention. Still wearing his riding spurs he entered the convention just as the vote was about to be cast. Without even a word with his fellow delegates, Caesar Rodney completed the Delaware vote in favor for independence.

A few days after the signing, Congress ordered the Pennsylvania Associators, or militia, to march to General Washington’s aid in New Jersey. Thomas M’Kean, also a colonel of a regiment in the associated militia, led his battalion to the sounds of battle and delivered a message to the commander in chief.  Under heavy fire from the enemy M’Kean “behind a smiling providence,” passed through great peril to complete his mission. In fact, with a price on his head, M’Kean continually moved his wife and eleven children away from British incursions till they found a nice cabin on the Susquehanna River, from which they had to again move when the Indians came near on the warpath.

Upon his recall, Colonel M’Kean joined the Delaware convention called to draft a constitution for the state. Already fatigued by travel, M’Kean spent the entire night drafting the state constitution himself. The next morning he presented it to the assembly, and it passed by unanimous vote.

In 1781 M’Kean was elected president of Delaware while serving simultaneously as chief justice in Pennsylvania, a post he held for a total of twenty-two years (1777-1799). One historian noted that “Thomas M’Kean was the only signer of the Declaration to be the chief executive of two States and a concurrent office-holder in two States.” For the eight years prior to his retirement in 1808, he served as Governor of Pennsylvania.

As might be expected, M’Kean also served in the Constitutional Convention in 1787, representing Pennsylvania. His presence at that momentous assembly continued his total commitment to the new nation and unrestrained service toward its success. He lived a full eighty-three years, dying in 1817. His burial in the First Presbyterian Church cemetery in Philadelphia finally provided rest for one of the most remarkable public servants in American history.

Thomas M’Kean’s comments to a friend summarized his life:

The law, sir, has been my study from my infancy, and my only profession. I have gone through the circle of office, in the legislative, executive, and judicial, departments of government; and from all my study, observation, and experience, I must declare, that from a full examination and due consideration of this system, it appears to me the best the world has yet seen.