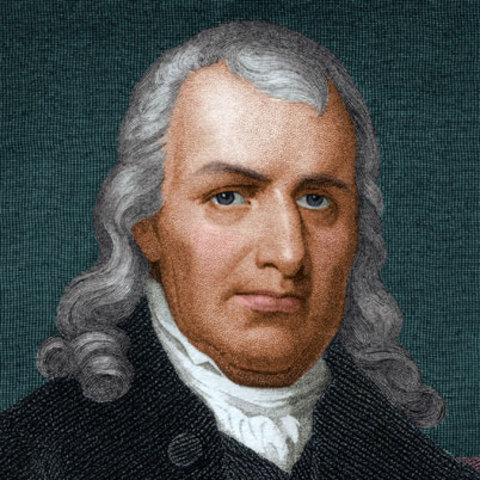 Born on April 17, 1741 in Somerset County, Maryland, Samuel was the only child of the Reverend Thomas Chase and Matilda Walker Chase. Since his mother died in childbirth, his Episcopalian pastor father raised the boy who would later sign the Declaration of Independence.

After studying law under a local attorney, Sam was admitted to the bar at the age of 20, and soon after married Anne Baldwin, with whom he had six children.

At the age of 23, Chase was elected to represent Maryland in the Continental Congress. His political beliefs were more progressive and liberal than his fellow congressmen. Some of the laws he helped to pass were in direct opposition of the royal governor, one of which was to cut the income of the clergy, a move that greatly affected his father’s occupation. The fiercely independent Maryland patriot also helped to instigate an angry mob after the Stamp Act was passed.

Long before most delegates even conceived of independence, Chase was a vocal advocate for succession, going so far as to say, “by the God of heaven I owe no allegiance to the king of Great Britain.” Along with Benjamin Franklin, Charles Carrol, and John Carrol, Chase traveled to Canada to persuade sympathizers to join the colonies. After unsuccessfully encouraging support, they returned to congress to find the representatives in a heated debate over independence.

Instead of acting as a passive representative, Chase was active in his role and duty to his patriotic cause. At once, Chase set off going door to door, making public speeches, earnestly persisting citizens to write their congressmen persuading them to vote for independence. Later Samuel wrote to John Adams, “the people have fire, if it is not smothered.” He returned shortly to vote for independence on July 2, 1776 and sign the Declaration of Independence a month later.

William Ellery, the delegate from Rhode Island, remarked, “Unlike the calm deliberation of the majority of the signers, Chase wrote his name as though he wished the ink were pure venom that could somehow bring death to King George.”

Chase continued to serve in congress until 1778, when he had to return home to care for his children after his wife died. Back in Maryland, Chase happened to attend a debate where the young pharmacy apprentice William Pinkney spoke. After hearing the young apprentice speak and knowing that he was too poor to afford law school, Chase took Pinkney under his wing by funding his law studies to further develop his potential. William Pinkney later became a U.S Representative, diplomat, attorney general, and senator, only by the generosity of Samuel Chase.

Chase continued to practice law, until in 1788 he was appointed judge of criminal court in Baltimore. Nearly eight years later, George Washington appointed Chase to the Supreme Court. Interestingly enough, Chase became the only Supreme Court judge to be impeached. As a Federalist, Chase believed in a strong central government. President Thomas Jefferson, leader of the Republicans, disliked the idea of judges being appointed for life. He feared that under such a system, the judiciary might become too powerful. When Samuel Chase expressed Federalist opinions from the bench, Jefferson encouraged the House of Representatives to impeach him.

Although Chase did not commit any crime, save from voicing an unpopular opinion, he was impeached for his beliefs. His trial established the Judicial Review, which is the Court’s power to void legislation it deems unconstitutional, a power that makes the judiciary one of the three primary branches of the federal government (the other two branches being Congress and the president). Later, he was acquitted. However, the damage was done. Like many of the signers, Chase also suffered from intense gout, a cripplingly painful disease. Shortly after his seventieth birthday he died.