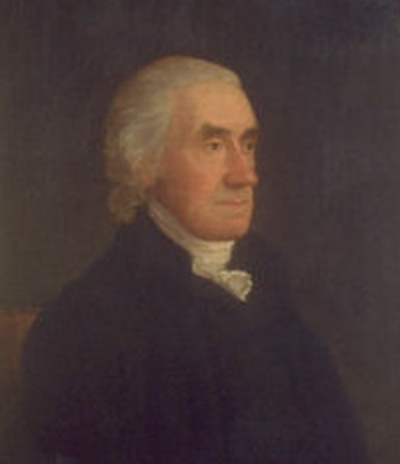 Son and grandson of Congregational ministers, the Treats and the Paines, gave this signer of the Declaration of Independence a theological bent which he pursued early in life. Born in 1731 and educated at both Boston Latin and Harvard, Paine’s uncertainty of his calling in life resulted in pursuing a position as a teacher, then as a pastor, in which capacity he served as a military chaplain in the French and Indian War. Still uncertain, Robert took to the sea, traveling to a number of foreign ports and even serving on a whaling vessel near Greenland. Upon his return home, Paine unexpectedly married his friend Sally Cobb who eventually bore him eight children. He finally settled on law as his life’s work. As providence would have it, in 1770 Robert Treat Paine found himself the prosecuting attorney in the “Boston Massacre” case.

The British soldiers accused of murder were ably defended by Attorney John Adams; he ran roughshod over the arguments of Paine and persuaded the jury to acquit most of the accused and convict two only of manslaughter. Although the loser in the trial, Robert Treat Paine basked in his new celebrity status as a defender of the people and opponent of tyranny. Paine rode his newfound fame to a seat in the legislature and to both Continental Congresses. All agreed that the amiable raconteur was a reluctant secessionist; he opposed so many proposals he became known as the “objection maker.” Although a friend of John Hancock, his reluctance to pursue independence strained even further his relationship with the two Adams. Nonetheless, he signed the Declaration in August of 1776.

Paine presented no new ideas in the Congress and his cantankerous ways elicited this comment from Benjamin Rush: “He had a certain obliquity of understanding which prevented his seeing public objects in the same light in which they were seen by other people.” Paine served on many congressional committees and retained his popularity in Massachusetts as evidenced by holding various offices there, such as attorney general, member of the legislature and a delegate to the convention that drew up the new state constitution.

As happened to John Adams family, one of Paine’s sons, his namesake in fact, overindulged alcohol and lived a life disapproved by his father. Along with service as a lawyer, Junior wrote poetry, married an actress (considered tantamount to marrying a prostitute), and gambled away his income. He died in his parent’s attic at the age of thirty seven.

Robert Treat Paine continued his public service till overtaken by deafness. As a judge he had a reputation for moral rectitude and Christian compassion, but never losing his wittiness nor combativeness, from the bench. Paine died at eighty three and is buried in the “Old Granary” Cemetery near Boston Commons, just a few feet away from his boyhood friends and classmates John Hancock and Samuel Adams, with whom he helped create a new nation.