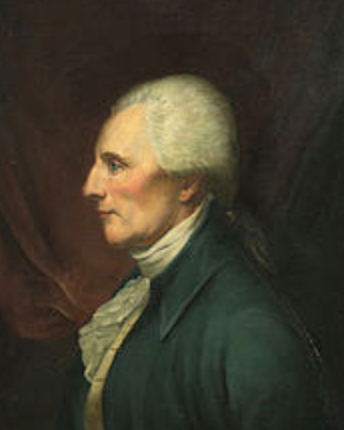 No family became so closely associated with Virginia than the Lees. Richard Henry was one of two Lee brothers who signed the Declaration of Independence and one of five who served simultaneously in the Virginia House of Burgesses. Epileptic and accident prone, fiercely loyal to his family even to his own hurt, his elegant manner did not prevent Lee from leading the fight against English tyranny side by side with his co-conspirator Patrick Henry. Missing four fingers on one hand due to a swan hunting accident, he held a black silk kerchief in his hand, which gave additional flourish to his accomplished and powerful oratory.

Born at Stratford Hall in Westmorland County, Virginia, the eldest of six sons, Lee was tutored at home in the family school house until being sent to England for formal instruction from age 11 to 18. His first marriage produced four children and his second, five more. By the time he was elected to serve in the Continental Congress, Richard Henry had captained the Westmorland militia in the French and Indian War, surviving both British arrogance and the price paid for it by General Braddock at the Monongahela River. He also served faithfully as Justice of the Peace and in the House of Burgesses, along with four of his brothers, until it was dissolved by the Royal Governor. He and Patrick Henry formed the core of the Sons of Liberty and with Thomas Jefferson, the Committee of Correspondence.

While the majority of the delegates to the First Continental Congress hoped for a reconciliation with the Crown, Lee advocated the establishment of militias in preparation for further depredations by the British army, a proposal rejected by the Congress. He linked up with the outspoken Samuel Adams and he wrote letters to the King, which no doubt enraged his majesty; he proposed in the Second Congress, winning approval this time:

“Resolved: That these United States are, and of right ought to be, free and independent States, that they are absolved from all allegiance to the British Crown, and that all political connection between them and the State of Great Britain, is, and ought to be, dissolved.”

Seconded by John Adams, it was approved on 2 July, 1776. Historians have noted that King George desired more than any others, the heads of George Washington and Richard Henry Lee in nooses on Tower Hill. Lee’s signature adorns the Declaration, of course, as well as The Articles of Confederation. He served in the Continental Congress till 1779 and then in the Virginia legislature till 1784.

During the war Lee also led the county militia in a number of actions against British attack, one time suffering a horse fall as the British raced toward him up the beach. He conducted a successful fighting retreat. One British officer complained that whenever they landed in Westmorland, the militia were always on them in minutes.

Richard Henry Lee opposed ratification of the Constitution, allying himself with Patrick Henry, George Mason, Judge Tyler and others who believed the new instrument of government granted too much power to the President and left room for future tyranny against the states. He wrote a series of public articles known as “Letter from the Federal Farmer” in which he argued his case to the voters. Like his anti-federalist colleagues, he acquiesced to the new order and served in the United States Senate. He became known as a defender of religious freedom and an opponent of slavery. In 1794 Lee died from injuries sustained in a carriage accident, universally mourned as one of the most devout Christians and effective patriots of the age.

Unlike most of his fellow signers and politicians, he was a farmer and not a lawyer. He probably could not have sat still long enough to bother. Nonetheless, he knew the law, was considered the Cicero of his day and in his personal life, “a kind and affectionate husband, a generous neighbor, a constant friend, and in all the relations of life, he maintained a character above reproach.”