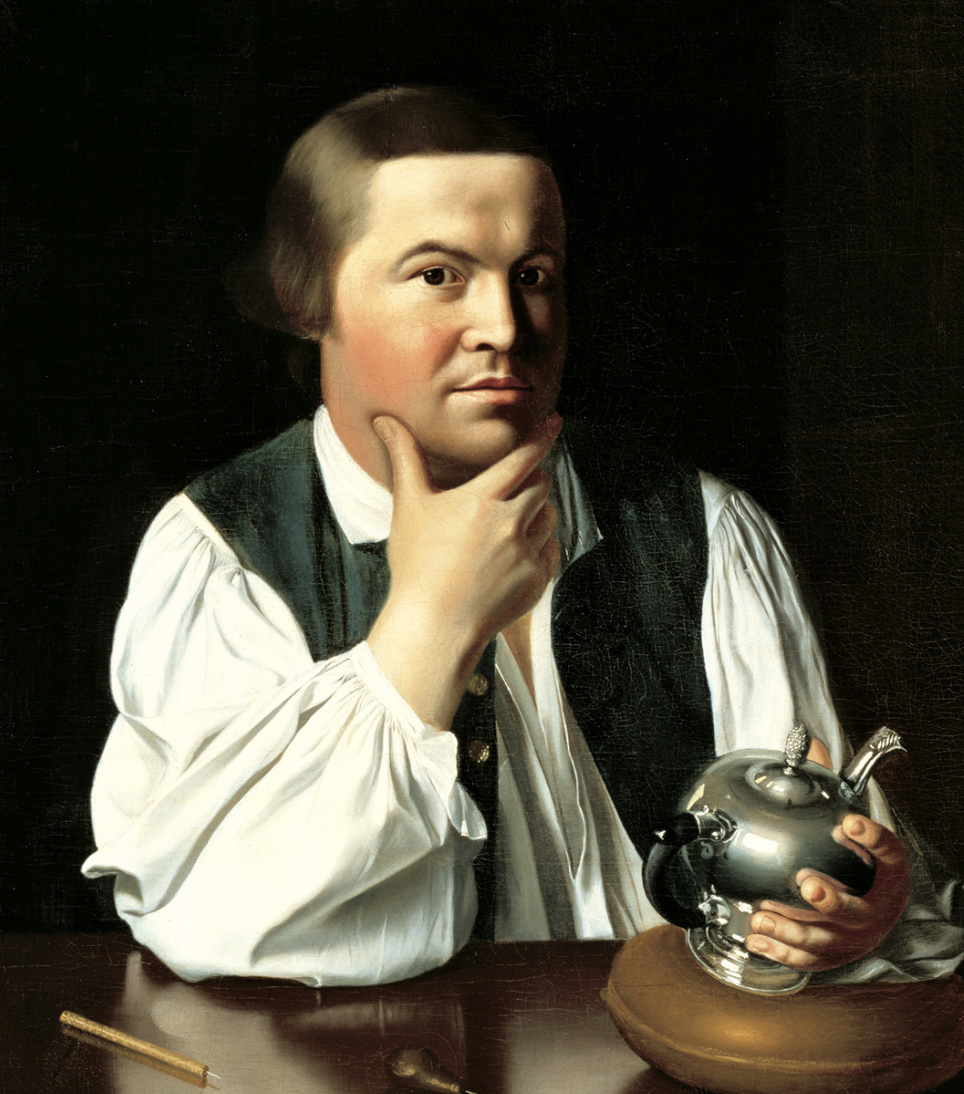 The third of thirteen children of Apollos DeRevoire, a French Huguenot silversmith from the Isle of Guernsey, Paul followed in his father’s craftsman footsteps. In the years leading up to Independence, throughout the war, and deep into the “Federal Period,” Paul Revere probably accomplished more in life than any two others of the founding fathers. Yet, he would be a relatively unknown figure had not the New England poet William Wordsworth immortalized him in a poem in 1863, “Paul Revere’s Ride.”

As one among many silversmiths in Boston, Revere never confined himself to one trade, nor gain satisfaction from a single role in the rebellion against the Mother Country. He engraved portraits, wrote biting political cartoons, and crafted seals, bookplates, coats of arms, and manufactured dental devices. As the leader of the “mechanic class” of Boston, he came in contact with the lawyers, doctors, and merchants who would cast off what they considered the red-coated tyranny. As a good friend to Samuel Adams, John Hancock and Joseph Warren, Revere served as an organizer and courier for the Sons of Liberty and dressed as an Indian in the “Tea Party” raid, no doubt an act that fooled no one as to his identity. Although he circulated among the British officers socially, they tried but could never prove his complicity in the underground resistance, until it was too late.

Paul Revere was a magnificent horseman and proved his speed and prowess many times over. Beside his famous “midnight ride” to warn Hancock and Adams in Lexington, he made a mid-winter ride to inform the New York Sons of Liberty regarding the Boston Tea party and to Philadelphia and New York City to inform his fellow rebels of the Boston Port Bill. As the official courier and liaison of the Massachusetts’ Provincial Congress to the Continental Congress, Revere kept contact with the men who were building the Republic. Even as his name was being mentioned in dispatches to the London papers, he was riding to warn Concord militia to hide their powder and to Durham to warn General Sullivan of a British move against Fort William and Mary. He printed the first issue of Continental currency and set up a gunpowder production plant in Canton, Massachusetts. He designed the official state seal used today in his home state.

Revere rose to the rank of Lieutenant Colonel of Massachusetts’ militia during the war and served in the disastrous Penobscot expedition in 1779. He was acquitted of charges by the commander of that fiasco who was likely seeking a scapegoat for the fiasco he himself created. If the British thought that capturing or killing Paul Revere would put an end to such a rascal, Revere’s sixteen children were available to pick up where he left off. As providence afforded, he survived the war and prospered in the aftermath in his silver trade as well as casting bells and cannons, and supplying bolts, spikes, pumps and copper accessories to the fledgling United States Navy, in particular, the USS Constitution, “Old Ironsides.”

“The quaint figure of the aged silversmith, who persisted in wearing the costumes of Revolutionary days throughout his life, was long a familiar one on the streets of Boston.” He continued active in civic affairs, dressed in his cocked hat and knee breeches; he is credited as the decisive influence in the successful ratification of the Constitution by his state. He died at the age of eighty three, full of years, and surrounded by a small army of fifty grandchildren.