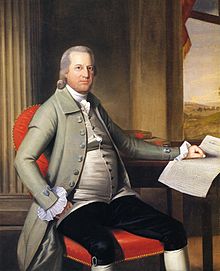 Since the first patriotic act of his ancestor Henry Wolcott, who immigrated to America as one embracing the principles of liberty, Oliver followed in his footsteps when he signed his name to the Declaration of Independence and held command of the Connecticut militia in the American Revolution. His own words testify to his principles of liberty when he said, “I shall most cheerfully render my country every service in my power.”

After studying medicine at Yale College, Oliver immediately responded to the first call of his country by applying his energies to the French and Indian War on the Northern territory. Receiving a commission as captain from the governor of New York, he led a company to defend the northern border near the regions of Canada. His experience in the French and Indian War was the first of the many opportunities he would take in defense of the American cause.

Instead of taking up his practice in medicine, he accepted the role of sheriff in Litchfield, Connecticut and commenced his study in law. In the next twelve years Oliver served as a member of the state council, and in 1775 was appointed by the Continental Congress as commissioner of Indian Affairs. This role ensured the Indians’ neutrality, a useful asset during the years of the Revolutionary War. The same year he was elected as a delegate to the Continental Congress. He took his seat in January, but contracted an illness, delaying his signing the groundbreaking document proclaiming independence from Britain.

It is commonly said that actions speak louder than words, and although he couldn’t contribute to the discussions at Congress, Wolcott served in the Connecticut Militia as Major General, leading fourteen regiments in the defense of New York. He was not be able to sign the Declaration of Independence until September 9th. Returning to Connecticut, and passing through New York City, Oliver found himself caught up in boisterous celebrations in response to a reading of the Declaration of Independence. The excited mob of soldiers surged to the bowling green on Wall Street and in their patriotic zeal tore down a huge statue of George the Third, which stood picturesquely on the Green. Oliver Wolcott stood nearby as they tore it to pieces and paraded the severed head through the city. After the crowds parted Oliver gathered the chu nks of lead and took them to his home in Litchfield, and with the help of his family melted King George into lead bullets. The bullets Oliver would then use against English troops at the Battle of Saratoga.

His wife of forty years, Laura Collins Wolcott, “a woman of almost masculine strength of mind, energetic and thrifty,” responded to the American cause with almost equal gusto as her husband. While Oliver Wolcott was away from home, Laura “attended to the management of their farm, educated their younger children, and made it possible for her husband to devote his energies to his country.” While her husband held nothing in reserve for the cause of American Independence, Laura Wolcott held nothing from the cause of the war.

In 1774 Wolcott was elected to the council and continued a member until his election as Lieutenant-Governor in 1786. A large part of the time that he was a member of the Continental Congress he was also in the field with the army or engaged in recruiting and organizing troops for the army. In 1796, he was elected Governor and continued in that office until his death. During many of these years, almost the entire burden of directing his domestic affairs rested on the shoulders of his wife. No wealth, power or accolades could provide more solid proof of patriotism and sacrifice than Oliver Wolcott’s long life of “cheerfully rendering” every possible service to his country. He passed away at the ripe old age of seventy-one.