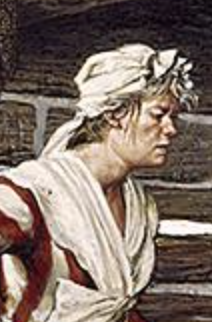 Nancy Hart was an adamant and fierce patriot. Her single-handed efforts against the British, as well as her covert activities as a patriot spy, have become legendary.

Nancy Ann Morgan Hart was born in North Carolina around 1735. During the early 1770s, Hart and her family left North Carolina and made their way to Georgia, eventually settling in the fertile Broad River valley. Her cousin, Daniel Morgan, was a prominent general in the Revolutionary War, leading the way in the Battle of Cowpens in South Carolina.

As a tall, broad woman who towered six feet in height, Nancy was a fearsome presence to behold. Her flaming red hair matched her vehement temper towards the British.

One evening, a Tory spy crept up to the log cabin, and one of the Hart children, noticing an eyeball peeking through a crack, secretly informed her mother. Hart, who was making soap around the fireplace, filled her ladle with boiling soap water and flung it through the crack. A scream confirmed her aim. The Tory was hog-tied and taken as a prisoner to local militia.

Once five Tories came to her cabin and demanded information concerning the location of a certain Whig leader. Hart insisted that no one had passed through her “neck of the woods” for days. Convinced that she was lying, one of the Tories shot and killed Hart’s prized turkey. After ordering her to cook the turkey, the Tories entered the cabin, stacked their weapons in the corner, and demanded something to drink. Hart obliged them by opening her jugs of wine. Once the Tories began to feel the intoxicating effects of the wine, Hart sent her daughter Sukey to the spring for a bucket of water. Hart secretly instructed her to blow a conch shell, which was kept on a nearby stump, to alert her husband and neighbors that Tories were in the cabin.

As Hart served her unwanted guests, she frequently passed between them and their stacked weapons. Inconspicuously, she began to pass the loaded muskets, one by one, through a chink in the cabin wall to Sukey, who had by this time slipped around to the rear of the building. When the Tories noticed what she was doing and sprang to their feet, Hart threatened to shoot the first man who moved a foot. Ignoring her warning, one Tory lunged forward, and Hart pulled the trigger, killing the man. Seizing another weapon, she urged her daughter to run for help. Hart shot a second Tory who made a move toward the stacked weapons and held off the remaining loyalists until her husband and several others arrived. Benjamin Hart wanted to shoot the Tories, but Hart wanted them to hang. Consequently the remaining Tories were hanged from a nearby tree. In 1912 workmen grading a railroad near the site of the old Hart cabin unearthed a neat row of six skeletons that lay under nearly three feet of earth and were estimated to have been buried for at least a century. This discovery seemed to validate the story of the Hart legend.

Nancy eventually found peace from her seething hatred of the British in a personal relationship with God. According to former Georgia governor George R. Gilmer, whose mother knew Hart, the indomitable woman “went to the house of worship in search of relief. She . . . became a shouting Christian, and fought the Devil as manfully as she had once fought the Tories.”

Lake Hartwell, situated between Georgia and South Carolina, is named in Nancy’s honor, as is Hart county.