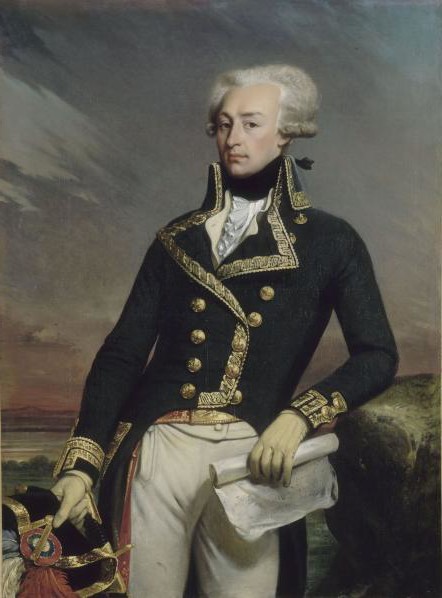 His full name staggers the elocution of the average American: Marie-Joseph Paul Yves Roche Gilbert de Motier, Marquis de Lafayette. In his seventy six years of life, Lafayette fought for American independence and for the revolution in France, which turned against him; he was imprisoned for five years by the Austrians, refused to serve under Napoleon, and finished his long life with the restored French Republic after Napoleon’s defeat. George Washington loved him as a son and gave him command of American troops in vital roles in the War for Independence. He named his only son George Washington. General Lafayette returned to the United States in 1824 for America’s fiftieth anniversary, for what proved to be a triumphal tour like none that would ever be held for any other foreigner in the history of the country. He is buried in France under soil brought from Bunker Hill.

The Marquis was born into a family of martial heritage. His father was killed fighting the British in the Battle of Minden, others of his kin served the crown and died on fields of glorie’. It was determined the young Marquis would follow in the families noble tradition. He married at the age of seventeen to the fifteen year old Marie Adrienne Francoise de Noailles and the couple would remain devoted to one another till her death thirty three years later. Trained in the military arts, Lafayette was eager for battle and in love with the American cause. Silas Deane, American Ambassador to France offered a commission to the young Lafayette to join George Washington’s army. Lafayette purchased a ship to take him and other French officers to America, where Congress commissioned him Major General at the age of nineteen! He would serve without pay, the rightness of the cause was enough.

The French nobleman arrived in time for the Battle of Brandywine, nineteen years old, knowing very little English and never having heard a shot fired in anger. He was wounded helping throw back an enemy assault on the battlefield, an incident not unnoticed by the rank and file. A magnificent sycamore tree still stands next to General Lafayette’s “headquarters” near the battlefield, a mute living sentinel that witnessed the young Frenchman in his first command performance in 1777. Washington wrote to Congress asking them for a command commensurate with the Marquis de Lafayette’s rank. He describes the young Frenchman as “sensible, discreet in manners . . . and possesses a large share of bravery and military ardor.” In a practical sense, Lafayette has “important connections and [an] attachment which he has manifested toward our cause.”

Congress voted him command of the division of Virginia light infantry and within less than a year, he was promoted to lead two veteran brigades engaged at Newport. He shared the hardships of Valley Forge, backed up General Washington against the Conway Cabal, and served with distinction in the Monmouth Campaign. In 1779 the Marquis returned to France as an advocate of the American cause, helping lay the groundwork for an expeditionary force to assist General Washington. He was greeted as a hero and appointed Colonel of dragoons before returning to America the following year.

Perhaps General Lafayette’s greatest service to the American cause occurred when he was sent by General Washington with a force of regulars to face down the traitor Benedict Arnold who was leading British troops on raids throughout Virginia, chasing the Virginia General Assembly through the mountains and raising havoc on every hand. Upon hearing of Lafayette’s command, Lord Cornwallis deemed it a small thing to “trap the boy.” General Lafayette “showed his ability to as a tactician by evading the trap at the Battle of Greensprings, just outside Williamsburg, Virginia, when American General “Mad Anthony” Wayne led a successful bayonet charge in the nick of time to extricate the troops. The Marquis joined the main American army of Washington at the final denouement of Lord Cornwallis and the British fortunes around Yorktown in October of 1781.

Returning home that same year, the Marquis de Lafayette continued in military service to France and became commander of the National Guard of France in 1789. He saved the king from the Paris mob, led a 52,000 man army against Austria in 1792. When the revolution fell into the bloody hands of the Jacobins, Lafayette fled to Belgium and ended up in a Prussian prison for five years. He stayed out of politics for eighteen years after being freed in 1800.

Lafayette returned to the United States in 1824 and was feted with “demonstrations of frenzied enthusiasm without precedent or parallel” in American history. The great esteem for the boy general did not lessen with time as state after state named towns and counties after him and when American troops landed in France in 1917 to assist them in the First World War, the doughboys shouted “Lafayette we are here!” The most famous aero-squadron of that war consisted of young American fliers who preempted America’s entry into the war by forming the Lafayette Escadrille. Many of them died for France, paying a debt held for a century and a half.