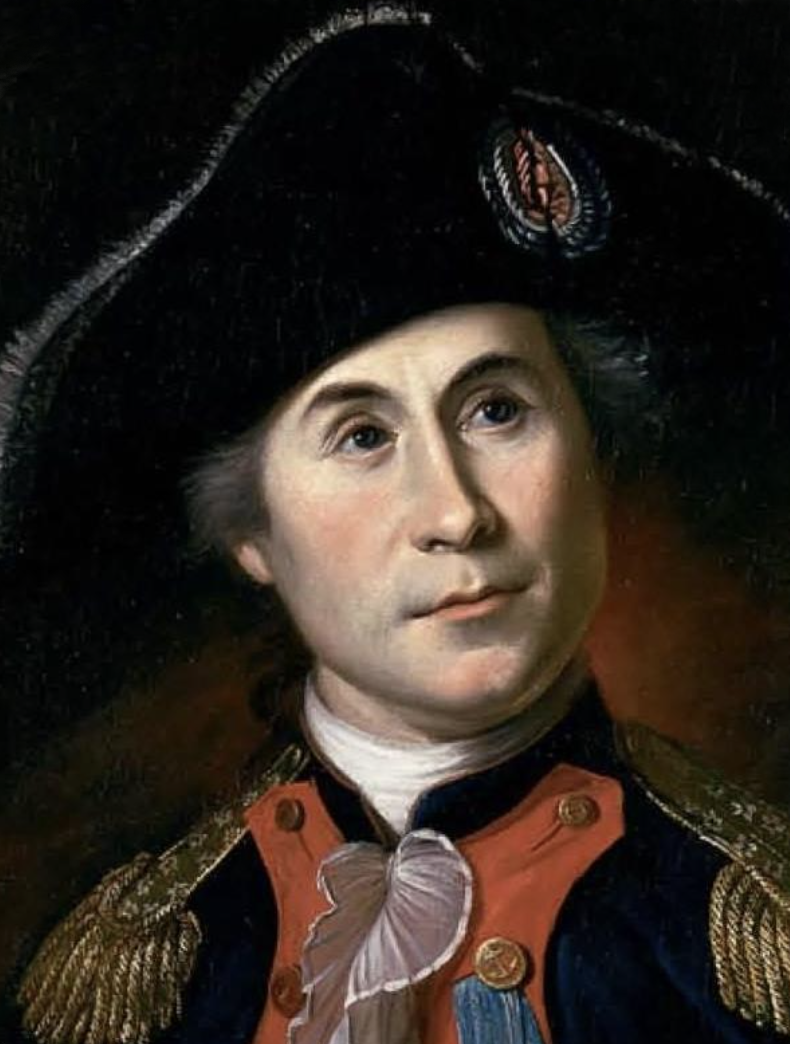 In the 1950s, country western singer Johnny Horton sang that John Paul Jones “was a fightin man, a fightin man was he, he sailed to the east and he sailed to the west and helped set America free.” And so he did. No American fighting captain has captured the interest of American boys in the past as did Jones. His colorful life– full of controversy, swagger, violence, and patriotic fervor has dominated the other great masters of the sea in history.

Born John Paul near Kirkudbright in Scotland, in 1747, to a gardener, the lad joined the merchant marine at the age of thirteen. Sailing aboard traders and slaving ships, he learned the art of navigation and command till on a cruise the captain and first mate died of yellow fever; he guided the ship safely home to port. As a reward he was made master of his own vessel by his Scottish benefactors. On his second voyage, he had a sailor flogged, a common punishment, but the man died a few weeks after of other causes. Paul was arrested for the incident but released on bail. On another occasion he killed a mutinous crewmember in a dispute over wages and, unwilling to face an admiralty court, fled to America where his brother lived, near Fredericksburg, Virginia. He added Jones to his name to escape detection.

When war broke out between the colonies and Great Britain, Jones volunteered for naval service, a decision that would eventually immortalize the name of the young Scotsman. Delegate Richard Henry Lee recognized Jones’s potential and recommended him to Congress. They commissioned him as a Lieutenant in the Continental Navy aboard the twenty two gun frigate, USS Alfred. He raised the first American flag on a naval vessel—the Grand Union flag.

After successful cruise to raid the Bahamas, Jones was given his own command, a small raider named the USS Providence, with which he captured sixteen British merchantmen prizes. He quarreled with his superior officer over command of a bigger ship and permission to fulfill his own raiding plans. Given a smaller ship than promised, USS Ranger, Jones was sent to harass British shipping around England. He docked in France and met the American ambassadors, befriending Benjamin Franklin, especially. They joined the Masonic Lodge together.

With a somewhat indifferent and recalcitrant crew, Jones raided around the Irish Sea, attempted to burn the ships in Whitehaven, and even tried to kidnap the Earl of Selkirk in his former hometown in Scotland. The crew were set on privateering and profit rather than serving as a warship of the United States, which proved a great difficulty for Captain Jones. The Ranger finally engaged a British warship, HMS Drake and captured her. Controversy followed in the wake when he arrested his own first officer and alienated the crew once again, but the victory signaled that the fledgling American navy could beat His Majesties ships at their own game.

The greatest victory for American naval forces in the entire war pitted Jones’s new ship, the forty two gun Bonhamme Richard and four other American vessels against the fifty gun HMS Serapis and twenty two gun Countess Scarborough on 23 September, 1779 near Flamborough Head. The English Captain demanded Jones’s surrender to which he replied, “I have just begun to fight!” The Bonhomme Richard captured the Serapis, but sank after a vicious battle of broadsides and boarding. Jones became a hero and received honors from the French government. He insisted he be called “Chevalier” Jones by Congress. Not receiving the rewards of rank and recognition he believed he should, Jones searched for new places his skills would be more appreciated.

Jones joined the Russian navy, where he quarreled with almost everyone, got recalled to Moscow after fighting the Turks, was accused of improprieties with a Russian girl, and returned to France, where he was found dead in his room at the age of forty five, controversial to the end. He was buried in a royal cemetery that disappeared, long forgotten, after the French Revolution. His grave was rediscovered in 1905 and his remains returned to the United States with great ceremony by President Theodore Roosevelt. He found his final resting place beneath a beautiful mausoleum at the Naval Academy in Annapolis. John Paul Jones had finally received the recognition and rank that were only his due.