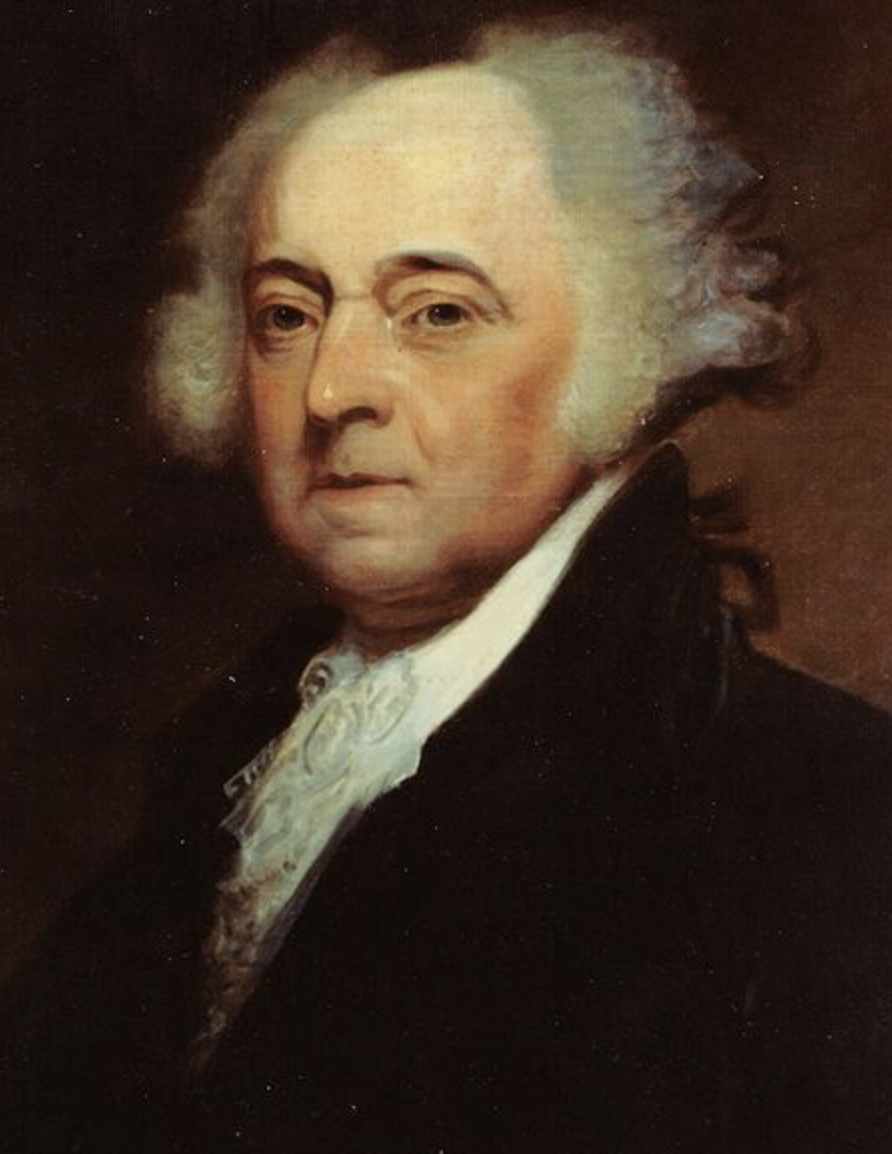 Honest, Forthright, Pretinacious
John Adams, a man whose greatest loves were family and farming, understood he was a branch on a tree planted by his forebearers, which rooted in soil enriched by the Protestant Reformation, a love of liberty, and respect for law, order, and hard work. When the mother country began substituting tyranny, abandoning centuries of legal precedent, and issuing demands for taxation without jurisdiction, Adams took up his pen, loosened his sharp tongue, and went to war in defense of his sacred trusts. Evaluating John Adams without considering his sense of history and right would be to describe the Alps without mentioning the Matterhorn.

Adams was born in Braintree, Massachusetts, where five generations of Adams had been born, hung their hats in the Congregationalist Church, and farmed the land. Showing itellectual promise as a child, John Adams matriculated at Harvard at the age of sixteen, taught school a few years and then entered the legal profession. Although he abandoned the orthodox Christianity of his fathers, he retained an appreciation for their steady virtues and love of the land and liberty.

John Adams came to prominence in Boston with his studied opposition to the Stamp Act, an inexpensive but unconstitutional tax. James Otis had inspired his previous opposition to Writs of Assistance, open-ended search warrants, and now his glib tongue joined in the resistance to unjust taxation. Adams personality tended toward the acerbic and cynical, if not “flinty” New England type, which won him few friends. When he agreed to defend the British soldiers accused of the “Boston Massacre,” realizing the dangers of mob action and the likelihood of justice becoming a casualty also, the burgeoning patriots looked on in astonishment as he won the case in a much publicized jury trial. Principle always trumped popularity or pragmatism with John Adams.

The colony sent him to both the First and Second Continental Congresses and the contributions he made there to independence defy hyperbole. While in Philadelphia, the British attacks on Lexington and Concord signaled the beginning of hostilities and Adams wisely proposed that George Washington take command in Massachusetts, signifying the unity of the colonies and recognizing both the General’s talents and Virginia’s key role in any future united government. The other congressmen turned to John Adams for advice in framing their state constitutions, for no one had given more study to their English heritage and rights.

Adams advocated independence early on and was quick to second Richard Henry Lee’s call for a Declaration of Independence. The delegates turned to Adams and Thomas Jefferson and several others to craft the document. The Massachusetts Congressman insisted on Jefferson’s drafting the instrument which Adams could help modify in due time, another strategically wise decision. Congress sent Adams to France, Puritan in Babylon, to help Benjamin Franklin. Adams took his son John Quincy with him, experience the young man would build upon until his own presidency in the 19th Century. John and his beloved wife Abigail, “Dear Heart,” corresponded throughout the years of separation, letters which are still available for all to read. They reveal a powerful and loving husband and wife relationship that has given historians intimate knowledge of a marriage, unavailable concerning any other Founders.

After independence, Adams served as the first Vice President and second President. Although estranged from his closest confidant among the signers, Thomas Jefferson, they reconstructed their relationship in later years; their correspondence lasted until both died on the same day, fifty years after the signing of the Declaration of Independence.