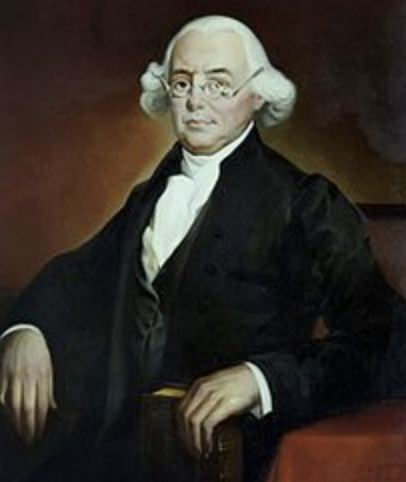 Scotland born and educated, the highly respected and intellectual Wilson was one of six signers of both the Declaration of Independence and the Constitution. The firmest believer that political power is derived from the people and that government should serve them, his pamphlets and speeches won over many in the debates of the day. He earned the respect of all of his colleagues and was considered by some in the Constitutional Convention second only to James Madison as “most able and useful.” He read the aged Benjamin Franklin’s speeches for him to the Convention and was considered his spokesman.

James Wilson began life near Cupar, in the “Kingdom of Fife,” Scotland in 1742. Educated at St. Andrews and Glasgow Universities, Wilson emigrated to Pennsylvania at the age of twenty three and earned his living teaching Latin at a local college and reading Law with the famous John Dickinson. It is likely he had developed his political ideas while at Glasgow and honed them in the real life circumstances of the American situation. He was one of the earliest to deny Parliament the right to legislate for the colonies at all, and his logical and precise legal mind came in handy when he was elected to the Continental Congress at the age of thirty three. Pennsylvania voted for independence three to two, thanks to Wilson’s deciding vote.

In 1779, a patriot mob laid siege to his home in Philadelphia, where he and friends fought them off, with loss of life on both sides. The attacks came in the midst of food riots; they were furious at Wilson for defending Tories in several court cases in the city. He left the city till the furor subsided. The incident became known as the battle of Fort Wilson. The discord eventually forgotten, the people of Pennsylvania chose Wilson to help in the creation the United States Constitution and their state Constitution. He served as a George Washington appointee to the U.S. Supreme Court. He also taught law at the school that became the University of Pennsylvania.

In his personal life James Wilson was married twice and fathering seven children. By all accounts he was “an affectionate and indulgent husband and father.” Wilson got caught up in the land investment fever that appealed to so many investors in his day. He borrowed large sums to purchase land in three states and fell heavily into debt; when land prices crashed he went bankrupt and was incarcerated in debtor’s prison in two different states, suffering the same ignominy as his fellow Pennsylvania delegate Robert Morris.

He died at the age of fifty five and was remembered as “friendly, interesting and hospitable, amiable and benevolent in his deportment, of strict truth and integrity.” He also signed the great treatise of liberty on behalf of his adopted state and country and played a huge role in the creation of the Republic under the Constitution.