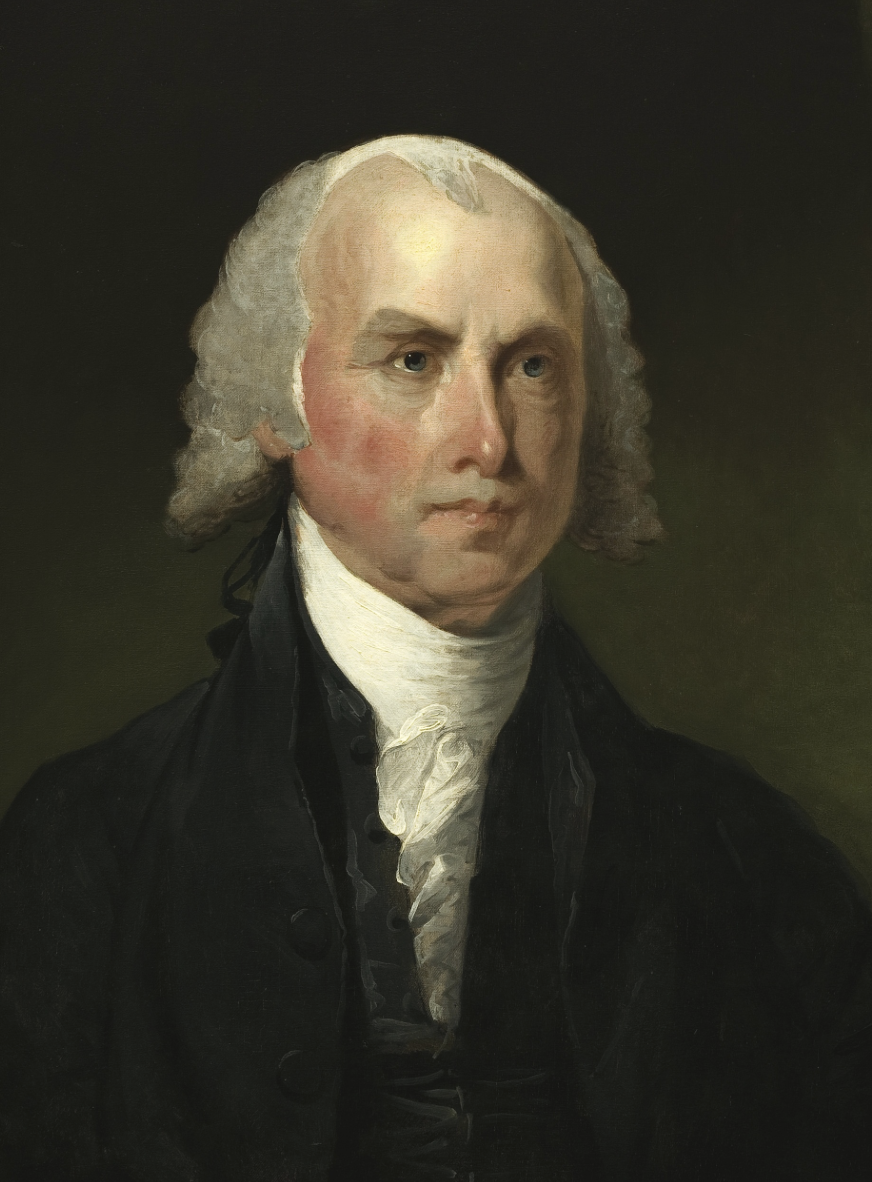 James Madison could not be elected President of the United States today, just based on his diminutive frame, five feet four inches and under one hundred pounds. But his education, genius, and leadership qualities might disqualify him as well! Educated by Presbyterian clergymen, student of the President of Princeton, the Rev. John Witherspoon and holder of hundreds of slaves, this Founding Father would eclipse most of the others as the epitome of political incorrectness. Nonetheless, Madison was the principle author of the Constitution of the United States, led the nation against the mightiest military forces on the planet in 1812, and helped construct Virginia’s Statute for Religious Freedom. Short of stature and of ill health though he may have been, James Madison was a giant of a Founding Father.

Madison was the oldest of twelve children born to tobacco planters on both sides of his family in Orange County, Virginia. His early tutor instilled in James Madison a love and intensity of learning. James was such a voracious scholar that he remained at Princeton after graduation to master Hebrew and political philosophy. During the War for Independence, Madison served in the Virginia House of Delegates and became a protégé of Thomas Jefferson, a man with whom he would commiserate the rest of his life and exchange visits between Montpelier, Madison’s home and Monticello, the beautiful mountain home of the Sage many times.

As the youngest member of the Congress, Madison spent many hours of careful negotiation and coalition-building in order to achieve the various compromises that would govern the nation as the Articles of Confederation. With the perceived inadequacy of that governing document, Madison and others called for a convention to make the nation stronger. The Constitutional Convention brought together thirteen states who could not agree on the most basic major issues. James Madison had created an outline for a new government, which became known as “the Virginia Plan.” Using that as a starting point, the representatives of the states hammered out a new instrument of governance and Madison became known as “The Father of the Constitution.” He fought even harder in the ratification debates in Virginia for he was up against some of the foremost orators and wise men of his day, Patrick Henry and George Mason. The majority sided with Madison.

“Jemmy’s” district elected him to Congress where he fought hard for the addition of the Bill of Rights to the Constitution, as he had promised in the ratification debates. He married at the age of forty two, the widow Dolly Todd; her extraordinary social skills came in handy when the Madisons lived in Washington.

James Madison served as Secretary of State under Thomas Jefferson, a period of American history fraught with difficult foreign policy decisions. Madison won the election of 1808 and added to what historians would call the “Virginia” dynasty. Madison’s term in office included a second war with Great Britain, fought to a mutually agreed upon status quo ante bellum, perhaps the most disagreeable period of his life.

James Madison outlived all the Founding Fathers dying at the age of eighty five, lionized as the man who most contributed to the creation of the Constitution of the United States.