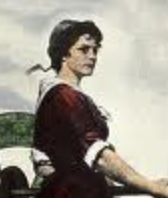 In in the winter of 1776, the patriots lost a great number of battles and the situation appeared hopeless. Some wondered if it was possible to gain independence after all. Overwhelmed with the lack of supplies and crippling defeat, many questioned if it was worth the sacrifice.

A group of men in Elizabethtown, New Jersey met in the home of Isaac Arnett to discuss the possibility of surrendering by signing an oath of loyalty to the crown in exchange for protection of property. When Isaacs’ wife, Hannah Arnett overheard their plot, she burst into the room and scolded them for their cowardice. Although there is no accurate account of what was said, we do know that Mrs. Arnett was persuasive enough to make the men change their minds.

For her efforts in possibly changing the course of American history, Hannah’s grave marker reads, “Near here rests Hannah White Arnett…Her patriotic words, uttered in the dark days of 1776, summoned discouraged men to keep Elizabethtown loyal to the cause of American independence.”