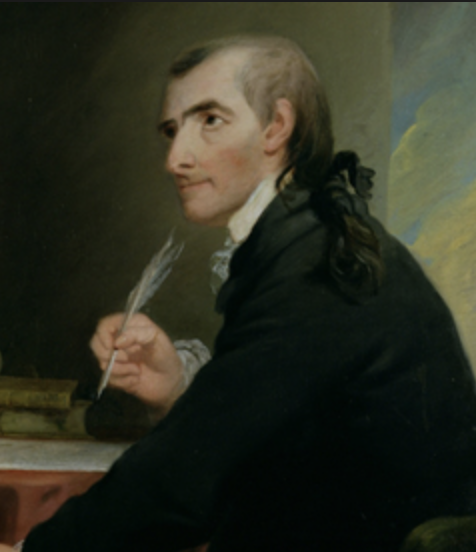 It was an age of unusually gifted men who, in another time, would have been the progenitors of an English-speaking Renaissance. Francis Hopkinson ranks alongside Benjamin Franklin and Thomas Jefferson as a brilliant and multi-talented artist, musician, inventor, wit, and political satirist. His position as a lawyer and a judge, a churchman and a family man, and then as member of the Continental Congress gave opportunity for the flourishing of his talents. Like many of his colleagues, he possessed a significant library, which, as was customary in those times, was looted and wrecked by the Hessians.

Francis was one of eight children of distinguished parents who provided solid education and useful connections that helped the children in later life. From his father Thomas, it seems Francis absorbed his interest in science, as he was a close friend of Franklin and is credited with introducing him to electricity. Encouraged by his mother Mary Johnson, Francis developed his musical interests, which led to his mastery of the harpsicord, invention of musical instruments, building a keyboard for Franklin, composition of the first American opera and other musical pieces including all 150 Psalms set to music for his church.

He was one of the first graduates of the University of Pennsylvania and entered the law profession to keep food on the table for his wife and five children. Although he came to the attention of royal officials in New Jersey, he sided with the opposition to the Stamp Act and wrote against the unconstitutional taxes of the following years. And that tactic became his most successful contribution to the independence movement—his witty satires, profound critiques of British intransigence and tyranny, and effective legal analysis of the times, made him a propagandist of the first water.

In 1776 he joined four other New Jersey delegates to the Continental Congress and happily voted for Independence, signing the document on August 2nd. Hopkinson was known as an undisguised Whig and his pamphlets against England had a very serious bite. His colleague from Massachusetts, John Adams, described him as “one of your pretty, little, curious, ingenious men. His head is not larger than a large apple . . .he is genteel, and is well bred, and is very social.” Francis published satirical poetry during the war, The Ballad of the Kegs bringing particular pleasure and notoriety. A party in Philadelphia was incomplete without the witty Hopkinson. The British were not amused by the diminutive stand-up comic and made certain to trash his house when the opportunity arose. As an artist he doodled caricatures of his fellow delegates and it is likely that he was the original designer of the first American flag—the stars and stripes.

After the war his friend George Washington appointed him to a federal judgeship in Pennsylvania, stating that Francis Hopkinson would bring “stability and dignity” to the federal government. He continued to write and play music, allegories, and poetry, admired by his peers in the new nation. He died of a stroke at breakfast at the age of fifty three in 1791. The posthumous accolades uniformly indicated he was one of most interesting and effective of the founders.

Fellow signer Benjamin Rush said of Francis Hopkinson’s poison pen, “the various causes which contributed to the history of the establishment of Independence and the federal Government is ascribed to the irresistible influence of the Ridicule which he occasionally poured forth upon the enemies of those great political events.”