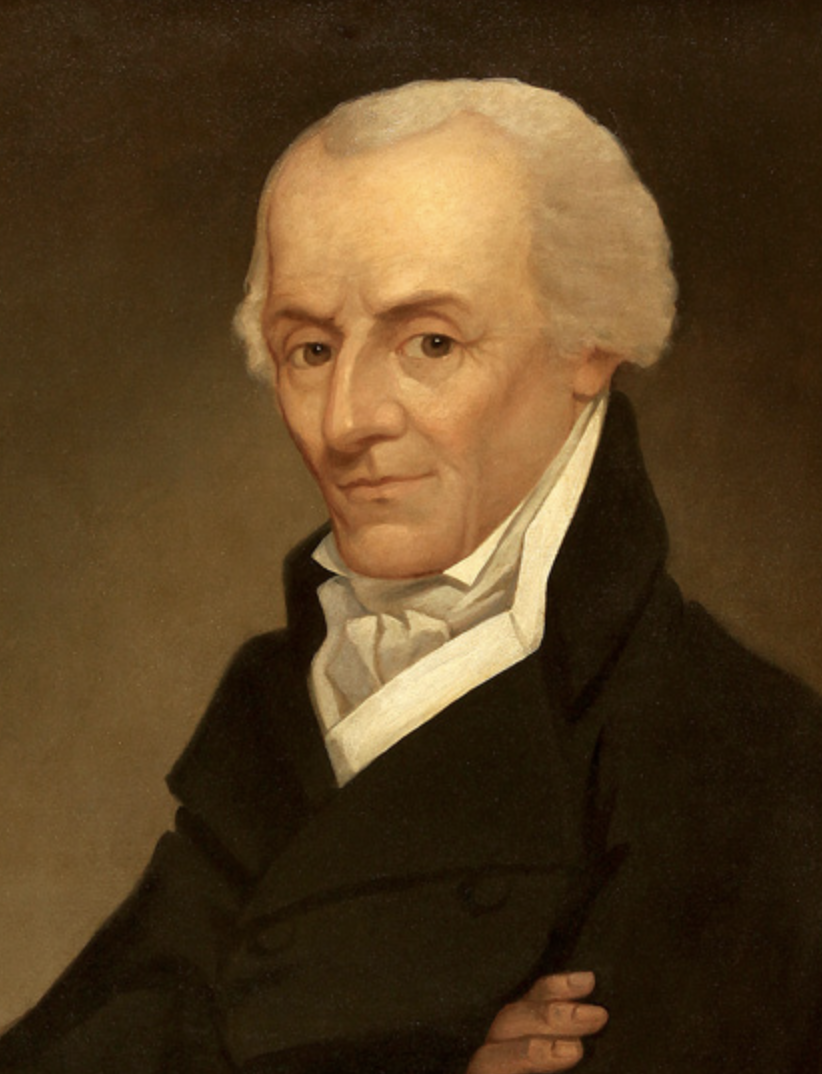 As the third of twelve children from Marblehead, short and stuttering, Elbridge would take a back seat to no one. After graduating from Harvard in 1662, where in his Master’s address he argued for American resistance to the Stamp Act, he joined his father’s cod-fishing business and “amassed a considerable fortune.” Proving himself as a community leader led to election to the General Court of Massachusetts in 1773 and to a close friendship with John Adams and connection to various political action groups of the colony.

On the night the Redcoats went after Samuel Adams and John Hancock, Gerry sent them a letter expressing his apprehensions for their safety. As a member of the Provincial Congress of Massachusetts, he himself fled and spent the night in a cornfield. The soldiers searched his house but took none of his belongings. Gerry was asked to find gunpowder for the soldiers besieging Boston, much of which he paid for with his own money that was never reimbursed.

Gerry’s service in the Continental Congresses was long and distinguished. He possessed a particular interest in military affairs and was constantly trying to get more money and supplies to General Washington. His wealth and influence were such that opponents quailed when he took to the floor to denounce a cause which he did not support. Some believed he voted against everything that he himself did not propose! He happily signed the Declaration of Independence, believing it was “the crowning achievement of his life.”

Elbridge Gerry resigned from Congress to return to his businesses and his ten children though he would continue to serve in various other capacities in Commonwealth and Country in the future. He was appointed to represent Massachusetts at the Constitutional Convention, having signed the Articles of Confederation years before. He made occasional hostile remarks and angered some of his colleagues with his rhetoric and in the end decided not to sign the new national instrument of law because of its lack of a Bill of Rights.

Gerry served a couple terms in Congress before being sent by President John Adams to settle a dispute with France over impressment and high seas skullduggery perpetrated by the French navy. In the event, Tallyrand, the French foreign minister, sought to bribe the American commissioners in what became known as the XYZ Affair. Because he stayed on in France another year after his insulted colleagues had sailed for home, Gerry was reprimanded for looking like a French patsy.

Upon his return, the Massachusetts cod magnate switched parties, affiliating himself with Thomas Jefferson’s crew. He failed three times before being elected Governor, but then pulled a stunt for which he is most remembered—he redrew the senate boundaries in his state to favor his own party, a feat for which such commonplace action today is known as Gerrymandering.

He died serving as Vice-president of the United States under James Madison. Having spent his fortune on “high living and a flashy political life,” he left his family impoverished. Even with his various character flaws and bad decisions, he was not ill-thought of by his peers at his death. He had lived out the motto carved on his tomb: “It is the duty of every citizen, though he may have but one day to live, to devote that day to the good of his country.”